Donald Trump’s bid in U.S. has Seoul on edge

Donald Trump’s bid in U.S. has Seoul on edge 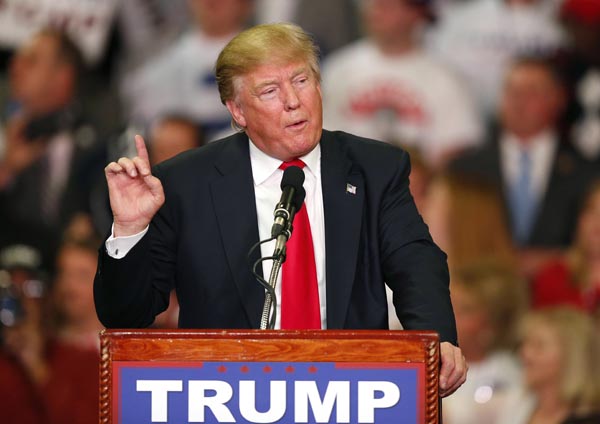 Republican presidential frontrunner Donald Trump’s controversial remarks on foreign policy and defense issues are alarming to South Korea, and its diplomats have been expressing their concern to U.S. officials.

Multiple senior U.S. officials said that diplomats representing countries around the world have complained in recent private conversations about the xenophobic nature of Trump’s remarks.

One U.S. official reportedly pointed out that it was unusual for foreign diplomats to express concern, even in private, about candidates in the midst of a presidential campaign.

Trump has not done much to make his foreign policy vision clear or even elaborated on the reasoning behind his unconventional proposals.

Trump has made numerous remarks about South Korea and the bilateral military alliance since he announced his candidacy last year. In January, he told cable television network CNN that the United States gets “paid peanuts” for deploying its troops to South Korea.

“South Korea should pay us and pay us very substantially for protecting them,” he said. Such remarks sparked alarm in Seoul and called into question his understanding of diplomatic and security issues in the region.

He said in a “Fox & Friends” interview the same month on the bilateral alliance, “We get nothing,“ adding “South Korea’s going to have to start ponying up.”

Trump’s continued assertions that South Korea pays almost nothing for keeping some 28,500 U.S. troops stationed on the Peninsula ignores the fact that Seoul has shared the costs for the troops for a long time.

The article predicted that Trump “would pick fights with Japan and South Korea over their purported insufficient payments for the U.S. troop presence in those countries, even though each country funds about half the non-personnel costs.” It pointed out that “the costs of dealing with a U.S.-free Asia, in which Japan and South Korea might go nuclear for fear of China and North Korea, could be higher by far.”

And international observers are not the only ones concerned.

On Wednesday, a group of 95 Republican national security, defense and political experts signed an open letter opposing a Trump presidency, declaring him unfit to be commander in chief of the United States.

The letter added that his insistence that close allies “must pay vast sums for protection is the sentiment of a racketeer, not the leader of the alliances that have served us so well since World War II.”

It pointed out, “He swings from isolationism to military adventurism within the space of one sentence.”

One of the signatories of the letter, Peter D. Feaver, a political science professor at Duke University and former National Security Council staffer, told the JoongAng Ilbo Tuesday that it was clear that Trump has not studied the issue and emphasized the “Korea-U.S. alliance is important for the stability of Northeast Asia.”