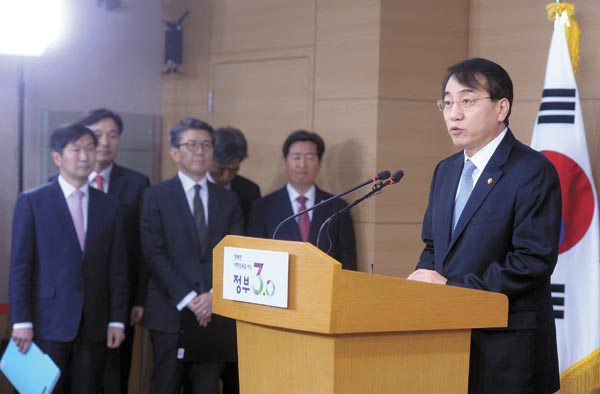 The South Korean government announced Tuesday a fresh set of unilateral sanctions on North Korea to curb its development of weapons of mass destruction that includes a blacklist of 40 individuals and 30 entities.

The new measures come as a follow-up to the UN Security Council resolution adopted one week ago that punishes Pyongyang for its fourth nuclear test and long-range missile launch. They go beyond Seoul’s previous sanctions on the isolationist regime.

Lee Suk-joon, head of the Office for Government Policy Coordination under the Prime Minister’s Office, outlined the fresh sanctions in an inter-agency press conference on Tuesday at the government complex in central Seoul.

“Our government’s sanctions on North Korea, along with the Security Council resolution, will greatly caution North Korean or third-country individuals or entities against getting involved in transactions that are related to Pyongyang’s development of weapons of mass destruction,” Lee said.

South Korea will ban the entry of any vessels that have stopped at a North Korean port in the previous 180 days. Previously, Pyongyang-flagged ships were banned.

Seoul also separately informed Moscow that it will suspend a symbolic trilateral project that would have transported Russian coal from its eastern border town of Khasan to Rajin Port in North Korea and then to South Korean ports.

Gen. Kim Yong-chol, director of the North Korean Workers’ Party’s United Front Department in charge of inter-Korean affairs and former director of the Reconnaissance General Bureau, the regime’s intelligence agency, was included in South Korea’s blacklist of 40 individuals. Kim, who is seen as being behind the sinking of the South Korean Cheonan naval ship in March 2010, was not named in the latest UN Security Council resolution.

Pak To-chun, a secretary of the Workers’ Party in charge of the military and machine-building industries; Ri Pyong-chol, a first deputy director of the Munitions Industry Department; and Hong Sung-mu, another deputy in the same department thought to be behind the Jan. 6 nuclear test, were among individuals blacklisted for involvement in the regime’s nuclear and missile programs.

The list also included two third-country individuals: Taiwanese Lyou Jen-yi, president of the Royal Team Corporation, who was blacklisted for the first time by Seoul, as well as Singaporean Leonard Lai, also known as Lai Yong Chian, president of Senat Shipping, who is on a U.S. Treasury Department blacklist.

The blacklist included 30 entities, of which 24 were North Korean and six were third-country companies.

The North Korean entities that have not been included on other international blacklists and are newly targeted by South Korea for serving as key cash routes for Pyongyang include Ilsim International Bank, Rungrado Trading and Korea Kumsan Trading.

Those blacklisted will be banned from engaging in financial transactions with South Korean entities, and Seoul will also freeze any assets held here.

Around half of the 70 individuals and entities were newly designated by South Korea following an independent investigation.

However, North Korean leader Kim Jong-un and his younger sister Kim Yo-jong, vice director of the Propaganda and Agitation Department of North Korea’s ruling Workers’ Party, who is tasked with maintaining her brother’s public image, were not on the list.

Likewise, Hwang Pyong-so, director of the North’s Korean People’s Army General Political Bureau and considered the second-most powerful person in the country, was missing as well, though he was included in the recent Security Council resolution.

UN Security Council Resolution 2270 was adopted unanimously on March 2 and is the toughest-ever international attempt to curb the financing of North Korea’s weapons of mass destruction programs.

The Security Council resolution blacklisted 16 North Korean individuals and 12 entities linked to its nuclear program, including Office 39, a secretive bureau that manages slush funds and generates revenue for the leadership, and the Reconnaissance General Bureau.

On the same day, the U.S. Treasury Department bolstered its own unilateral sanctions on Pyongyang and blacklisted 11 individuals, including top aides to Kim Jong-un and five entities linked to North Korea and its weapons of mass destruction programs.

Japan, the European Union and Australia have previously announced their own sanctions as well.

Lee also advised South Koreans not to visit North Korean restaurants overseas, particularly in China, as they function as sources of foreign currency for the regime.

The trilateral projects among North and South Korea and Russia, namely the Rajin-Khasan project, were not specified in the government’s statement of its new sanctions against Pyongyang announced Tuesday.

However, the government confirmed it had informed the Russian government of its plan to pull the plug on a joint logistics project involving the two Koreas and Russia.

“The government has cooperated in the project until now, but under such circumstances, we consider it difficult to continue such support,” said Kim Hong-kyun, special representative for Korean Peninsula peace and security affairs at the briefing. “When there is progress in North Korea’s denuclearization, we will review resuming the project.”

The message was conveyed to Moscow through a diplomatic channel on Monday.

The Rajin-Khasan Project is a three-way economic cooperation project to transport Russia’s raw materials, such as coal, from Khasan to Rajin Port in North Korea, and then to at least three other ports in South Korea.

The trilateral project was a key part of President Park Geun-hye’s “Eurasia Initiative.”