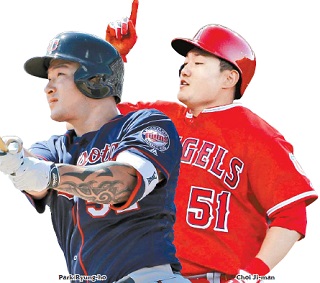 Yesterday was another solid day for South Korean baseball players in the Major League Baseball (MLB) as Minnesota Twins slugger Park Byung-ho and Los Angeles Angels Choi Ji-man each had a home run while the Seattle Mariners first baseman Lee Dae-ho put in a good performance in defense.

Coming out of the grand slam on Monday, Park blasted another one over the wall yesterday in the Grapefruit League game against the Toronto Blue Jays. Batting fifth and playing first, the South Korean slugger’s solo homer came off the 92 miles per hour (148 kilometers per hour) fastball by the Blue Jays starter Gavin Floyd in the second inning. It was Park’s second home run in two games. He went 1-for-2 with an RBI in yesterday’s game to aggregate his spring league record of 3-for-13, two home runs, six RBIs and four runs scored. Although his batting average stays low at .231, it is notable that two of his three hits are home runs. Despite Park’s effort, the Twins’ early deficit to the Blue Jays led to a 9-3 loss.

In addition to Park’s homer, the Angels slugger Choi also drove one out of the park yesterday in the Cactus League game against Arizona Diamondbacks. Going into the game playing first baseman and batting ninth, he stood in the batter’s box with two outs and a runner on third base in the sixth inning. Choi knocked the ball over the left-fence off a 84 miles per hour (136 kilometers per hour) cutter by Diamondbacks reliever Josh Collmenter. Choi’s spring league season record stands at 17 at-bats, four hits, five RBIs and .235 batting average in seven games.

The Mariners’ Lee started the Cactus League game yesterday against Cleveland Indians as fifth in the batting order and first baseman. Lee went into the batter’s box in the second inning with one out and walked to first with four balls. When the Mariners’ Shawn O’Malley hit a sharp single to right, Lee rushed past second base to get to third. The first run-scored of the Mariners came when Lee crossed home plate after Mike Zunino’s sacrifice fly ball to center field.

Lee’s performance was even more remarkable with his glove on. When a hard hit to the center by Jose Ramirez of the Indians threw off the Mariners second baseman O’Malley, Lee ran to second to cover the base and tagged Ramirez.

Later on in the same inning with runners on base including third, Lee caught a hit by Will Venable and threw it straight to home plate to get Mike Napoli out of the game. Finally, in the fifth inning, Lee dived to catch a ground hit by Ramirez and tossed the ball to pitcher Joe Wieland covering first. Overall, Lee seemed very light on his feet out in the field, offensively as well as defensively. “Lee looked good over there today,” said Mariners manager Scott Servais. “He’s played a lot of baseball. His head is in the game. He’s got a lot of feel for the game.”