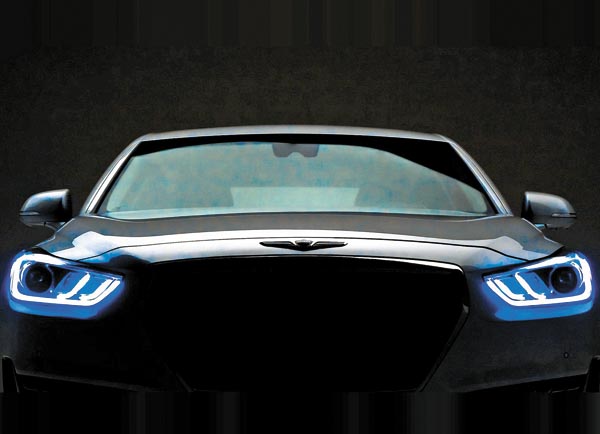 The competition to win top honors at the 2016 Car of the Year award organized by the JoongAng Ilbo was the toughest yet, with many competitive cars - including top-of-the-line flagship models - joining the contest.
At the seventh annual Car of the Year event, 52 cars by 27 auto brands battled it out. The biggest winner of the night was Hyundai Motor’s EQ900, the flagship sedan under the automaker’s new luxury brand Genesis, which took home the Car of the Year award largely because of its high-end features like Highway Driving Assist.

The award ceremony is scheduled for today at the Hotel Shilla in central Seoul.

The organizing committee said the cars were assessed in three stages: presentations by each brand, test drives on an actual track and in-depth discussions among judges. The panels consisting of 15 judges - including car journalists, former automaker executives and professors - agreed on the EQ900 as the best new wheels of the year, saying the car marks an upgrade to the nation’s vehicle manufacturing technology. The sedan, which comes with a 370 horsepower V6 3.3L Twin-Turbo engine, showed off a smooth and explosive driving performance stemming from its eight-speed automatic transmission and four-wheel drive system, the HTRAC, during a test drive held on a track in Hwaseong, Gyeonggi, in February. 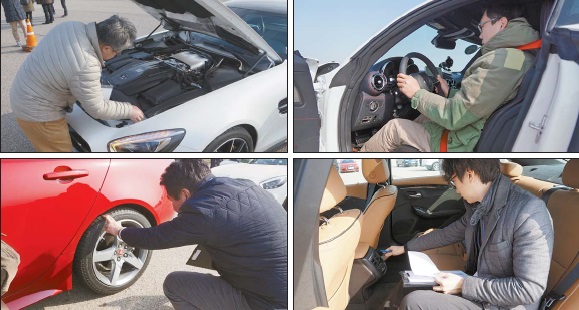 Top: Hyundai Motor’s Genesis EQ900 was named 2016 Car of the Year. Bottom: Judges of the Car of the Year award check out vehicles included as top-12 finalists, including the Mercedes-Benz AMG GT S Edition. The judges carefully inspected every part, including the engine, backseats and tires. A total of 15 judges including journalists and former auto company executives participated in the three-stage screening process that lasted nearly two months. [AUTO VIEW]

Still, the judges pointed out that Hyundai needs to develop a signature brand identity for Genesis to compete with other luxury brands like Mercedes-Benz and BMW.

Chevrolet’s Next Spark was the only minicar included as a top-12 finalist, with its fine driving performance and fuel efficiency of 15 kilometers per liter (35 miles per gallon), which gave the car its win in the environmentally friendly category.

The MINI Clubman, popular among those in their 20s and 30s with its iconic split rear doors, was named Smart Car of the Year.

Ssangyong Motor’s small Tivoli SUV was nominated in many categories, including SUV of the Year and Issue of the Year, but only managed to snag Consumers’ Car of the Year with its creative exterior design and good pricing options.

Kia Motors’ second-generation K5 sedan was named Challenger of the Year because of its innovations in design and technical features.

Chevrolet’s large Impala sedan won Issue of the Year because of the attention it attracted from consumers and netizens.

The panelists were chosen among those with more than 10 years of experience in car-related fields, and included engineers and racecar drivers.

This year, the judges went through a three-part evaluation process, including a discussion session for the first time. The competition was so fierce that only one out of every five cars submitted moved past the first stage of the process.

Audi played a video of its TT coupe on the road that appealed to judges. BMW presented on its 7 Series and the MINI Clubman. Oliver Britz, head of product management at Mercedes-Benz Korea, was there in person to answer judges’ questions about its sporty AMG GT S Edition 1. The judges asked very specific questions, like whether the Audi TT’s built-in navigation system really meets the needs of Korean consumers.

Safety was also a very important factor in the evaluation process. Judges asked about the number of air bags installed in cars and what score they have received on the Euro New Car Assessment Program safety assessment, which includes a crash test. Automakers also had to be prepared for questions about their target audience and explain the differences between the engines on models new and old.

The judges were particularly strict when it came to locally manufactured cars. Some asked about the difference between Hyundai Motor’s Tucson and affiliate Kia Motors’ Sportage. They also asked for details about the companies’ manufacturing processes, such as whether they use environmentally friendly materials.

Some automaker representatives had difficulty with the tougher questions, and the judges at times had to step in with suggestions or additional information. The judges held lengthy discussions after the automakers’ presentations.

The 12 finalists arrived at the Korea Transportation Safety Authority in Hwaseong, Gyeonggi, for test drives on Feb. 20.

Judges got behind the wheel of every single car and tested speed, safety and braking systems. They drove them on both regular roads and under extreme road conditions.

Mercedes-Benz’s AMG GT S Edition 1 did very well in the accelerating and braking tests with its 510 horsepower. The car disappeared from sight seconds after it began accelerating, leaving in its wake a massive roar.

Judges checked both the exteriors and interiors of each car very carefully, and inspected the trunks to look for any possible issues. They also tried highly touted user-friendly features to see if they really improved convenience.

The EQ900, the eventual winner of the top prize, was neck-in-neck with the BMW 7 Series in interior space and accessibility. Both introduced a number of new technologies while also offering spacious backseats.

“The EQ900 did open a new era of Hyundai’s luxury cars,” said Yu Ji-soo, president of Kookmin University and head of the judging panel.

But according to designer Kim Tae-wan, “The BMW 7 Series also has great features to meet local customers’ needs, and I was able to see how BMW had done a number of things in pursuit of perfection.”

The MINI Clubman’s barn-style rear doors and top-notch driving performance made it a standout among other hatchbacks and led to high marks from the judges.

Kia Motors’ K5 was positively evaluated in terms of noise and comfort. Judges said it offered a smooth ride comparable to large-size premium sedans despite only being mid-sized.

In the high-speed test, judges hit a 1.6-kilometer (1-mile) course at speeds of more than 200 kilometers per hour.

Chevrolet’s Impala was particularly stable at high speeds. Jaguar’s XE was fitted with winter tires for the test to demonstrate its safety in colder conditions, and while winter tires often reduce acceleration compared to sports or other all-season tires, the XE did not disappoint.

SUVs did very well on the durability test.

Hyundai Motor’s Tucson and Kia Motors’ Sportage competed fiercely during the whole evaluation process. They were practically equal in their noise and overall performance evaluations. Judges favored the Tucson’s exterior, but the Sportage won the competition by offering a relatively cheaper sticker price.

It wasn’t just the judges who were busy all day. Kia’s domestic marketing director, Seo Bo-won, ran around the test site to introduce the company’s cars to judges, and representatives from BMW and Ssangyong were similarly frantic.

The driving tests started at nine in the morning and ended well after sunset.

The third evaluation was held at the JoongAng Ilbo’s headquarters on Feb. 24. Judges gathered one final time to discuss the results and finalize the winners.