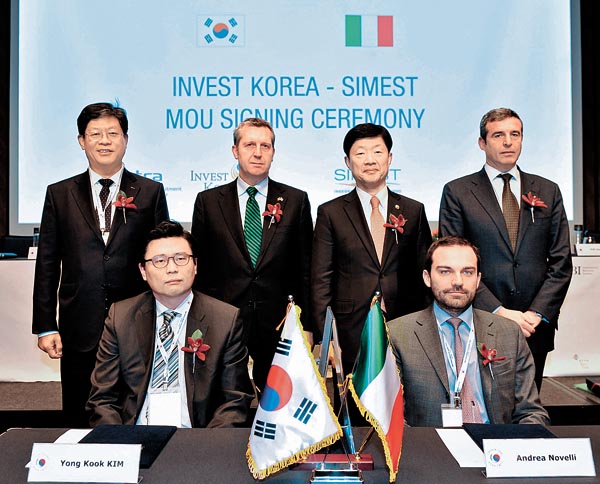 Korea and Italy have taken the first steps toward expanding their investment cooperation and jointly exploring third markets such as Eastern Europe and Southeast Asia.

The trade ministries and private sector business lobby groups of the two countries reached an agreement at the Korea-Italy Business Forum on Wednesday. The delegation visited Korea in response to the Ministry of Trade, Industry and Energy’s request last year for Italy to visit local companies to expand business cooperation.

The Korea Trade-Investment Promotion Agency (Kotra) reached a memorandum of understanding with its Italian counterpart, the Societa Italiana per le Imprese all’Estero (Simest), to start collaborating in exchanging investment and financing opportunities. The deal also calls on Simest to help in finding suitable business partners when Korean companies enter Italy.

The Korean private sector business associations, including the Federation of Korean Industries (FKI) and the Korea-Italy Economic Cooperation Committee, invited the Italian delegation to a luncheon meeting at the FKI headquarters in Yeouido, southwestern Seoul, to discuss business possibilities to jointly explore in other European and Asian nations.

Licia Mattioli, president and member of the technical committee for internationalization and foreign investors at Confindustria, a business lobby group, named fashion, engineering, procurement and construction as the four areas with potential.

Italy is strong in auto parts, cold chain logistics and fashion, but it is a small investor in Korea.

As repercussions of the 2010 economic crisis in Southeastern Europe have continued, the inbound investment from Rome to Seoul has declined to post only $30.5 million last year, one-fourth of the $116.8 million in 2013, according to Kotra.