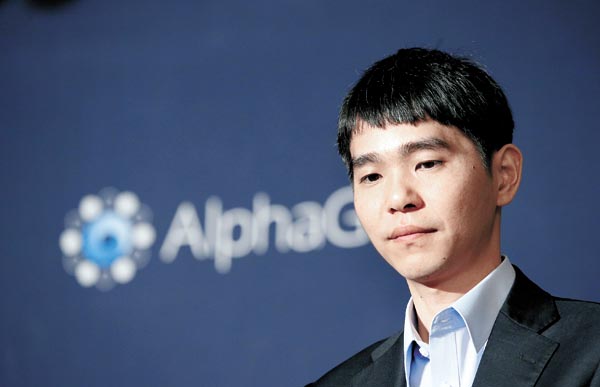 Lee Se-dol, a world champion of Go, speaks at a press conference after he was defeated by Google’s artificial intelligence algorithm AlphaGo in a historic match on Wednesday at a hotel in central Seoul. Lee said he was shocked because he never imagined losing against the computer program. [AP/NEWSIS]

AlphaGo, Google’s artificial intelligence system, beat world Go champion Lee Se-dol on Wednesday, the first of a five-game tournament in Seoul pitting man against computer in one of the human race’s most subtle games.

The Google DeepMind Challenge Match, which started at 1 p.m., ended at 4:31 p.m. when Lee proclaimed he was giving up. There was no room to outmaneuver the computer-generated algorithm after placing his 186th move, even though almost half an hour was left in the designated four-hour playing time.

“I was so shocked because I never imagined losing,” Lee said at a press conference following the game. “At the beginning, I felt AlphaGo would have a hard time. But then I was surprised by its capacity unfolding over the course of the play. Later, I thought the situation was difficult for both of us. Then, a very hard-to-fathom position came up from AlphaGo, and I was surprised again.”

Demis Hassabis, founder and CEO of Google DeepMind, the developer of AlphaGo, said his team was “extremely excited about and pleased with how AlphaGo performed” while also paying respect to Lee’s talent in the game.

Asked if he regretted accepting the match, Lee said, “Not at all.

“It was indeed shocking, but it’s inevitable,” he continued. “I never regret it because I played the game with great pleasure, and I look forward to future play [against AlphaGo]. The defeat today won’t psychologically affect me because I have experienced a number of world-class matches.”

But Lee failed to guarantee his own victory in the remaining four games as he did in February, when he predicted he would win all five games.

“I failed in the opening layout,” he said. “If I didn’t see the surprising placement AlphaGo made later in the game, I would say I am confident about tomorrow. But now I would say the chance [of me winning] is 50-50.”

Lee, 33, has won 18 world championships in Go. He debuted as a professional player at age 12 in 1995 and clinched his first international title, the 15th Fujitsu Cup International Go Championship, in 2002.

AlphaGo’s victory in the first match suggested the program has evolved more rapidly than many expected.

Analysts said the computer algorithm beating one of the best human Go players delivers a profound message about the evolution of artificial intelligence, or AI.

“It’s a deeply meaningful result in that the game of Go has been considered a highly challenging problem to solve in the AI field because it involves so many probabilities,” said Jason Han, chief technology officer of FuturePlay, a tech-centric start-up accelerator.

Kim Moon-sang, a professor of robotics at the Korea Institute of Science and Technology, warned about overly exaggerating the meaning of the victory.

“Even if AlphaGo won, that doesn’t mean it has surpassed human capacity yet,” he said. “AI catching up with humans’ various capabilities is still far away.”

Still, the ongoing Google-hosted match is set to become a milestone to gauge the progress of artificial intelligence. The five-day event is attracting attention worldwide - probably the most since the legendary match between IBM chess computer Deep Blue and chess grandmaster Garry Kasparov in 1997, which the computer won.

The match began at 1 p.m. sharp. Lee sat across from Dr. Aja Huang, DeepMind’s lead programmer, who placed stones on the board on behalf of AlphaGo. Huang, a Taiwanese, authored the Go program “Erica,” which won a gold medal at the 2010 Computer Olympiad in Japan. He is an amateur Go player himself with a rank of 6-dan.

Lee picked a black stone, which always starts the game. He made the initial move on the upper-right corner of the board. It took one and a half minutes for AlphaGo to make its first move. It placed its first stone on the upper-left corner, as it did in five games against European Go champion Fan Hui last year.

Each player was given a two-hour time limit and three periods of one-minute byoyomi, a Japanese word for extensions. The match ran through Google’s cloud computing, with its server located in the United States. It was broadcast live on YouTube, which is owned by Google.

In the tournament with Fan Hui, a European Go champion and 2-dan professional, last October, the time limit for each player was one hour, with three periods of 30 seconds byoyomi. AlphaGo’s five-to-nil victory over Fan shocked the Go community and the broader world.

AlphaGo fell behind Lee by up to four minutes in the first hour of the game, indicating it took longer for the program to think, or calculate, before making a move. The time gap widened to up to 10 minutes during the game.

“Since AlphaGo has two different networks that configure independently, it may have taken a longer time,” said Lee Kyoung-jun, a professor of business administration at Kyung Hee University in Seoul.

When 50 minutes were left, it was unclear who was winning. Commentators made jokes about AlphaGo repeating a series of mistakes that were hard to understand.

The atmosphere changed in just 10 minutes.

Kim Seong-ryong, one of the commentators in the press room at the Four Seasons Hotel Seoul in Gwanghwamun, central Seoul, counted the amount of territory claimed respectively by Lee and AlphaGo and announced that Lee had lost. Lee surrendered soon after.

“What we perceived as AlphaGo’s mistakes may have been intended as a result of calculations,” said Kim, a 9-dan professional player. “That means AlphaGo played with the minimum capacity required for it to win, which is freaking scary.

“In a nutshell, AlphaGo played in a way that is farthest from that of human players,” he continued. “The game entirely eliminated the emotion of a professional human player.”

In Go, called baduk in Korean, two players alternately place black or white stones on a square grid. The goal is to surround the opponent’s pieces and take up a larger total area of the board. Unlike with chess, the stones cannot be moved once placed unless they are surrounded and captured by the other player’s pieces. Go is mostly popular in Korea, Japan and China.

The second game is scheduled for 1 p.m. today, and the next three will take place at the same hour on Saturday, Sunday and Tuesday.