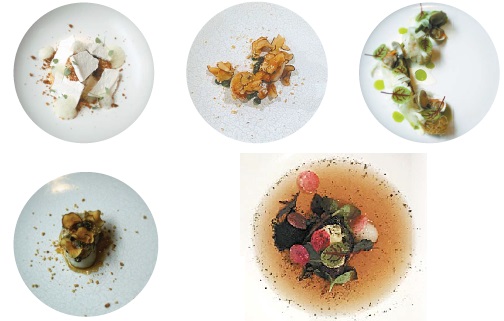 LYON, France - Korean chef Lee Young-hoon cooks French food at Le Passe Temps along with three other Korean kitchen staff, and two Korean hall staff and a Korean sommelier. But at the 26-seat restaurant in Lyon, the majority of diners are locals.

This interesting restaurant earned its first-ever Michelin star last month, marking the first time a Korean chef has achieved such an honor in the homeland of the Michelin Guide. The tire company releases restaurant guides each year, granting between one and three stars to select establishments.

Previously unknown in Korea, this restaurant has been attracting more Korean visitors since this year’s guide came out, as people want to see what the hype is about.

The chef, who began cooking relatively later in life upon starting college in Korea, has shown that having ambition and setting off in the right direction in pursuing goals can bring about jaw-dropping results. The 32-year-old chef earned an honor no other Korean chefs in France have achieved, only two years after opening his restaurant in April 2014 and six years after he started learning about French cooking at the Institut Paul Bocuse, one of the most prestigious cooking schools in France. 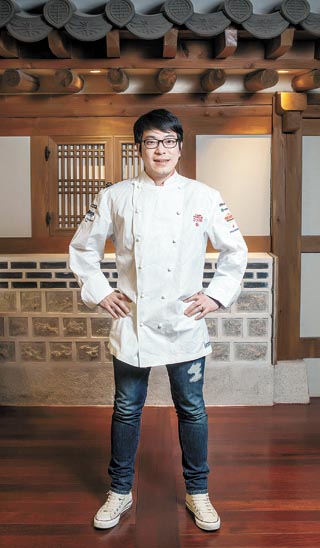 “My mom’s wish was for me to be on TV, and I made that happen for her,” Lee said, thanking his parents for suggesting that he pursue a career in cooking when he was feeling lost after high school.

Lee, who has made many of his dreams come true, also hopes to one day open a restaurant in Paris or Seoul. He shared his success story with the Korea JoongAng Daily at his restaurant in Lyon as well as while visiting Seoul, hoping to inspire more aspiring chefs to keep working hard.

Q. How did you learn that experts from the Michelin Guide would come review your food?

A. Someone else from Michelin came first early last year. He introduced himself as a Michelin inspector, and what he does is come check out restaurants and refer them to the actual reviewers for later. He said the book for 2015 is already out and he is checking out more venues for the 2016 version. He said the actual reviewer would come sometime between September and December [last year] and my restaurant, in some way, would be included in the book, and what the restaurant ends up with depends on how I do. 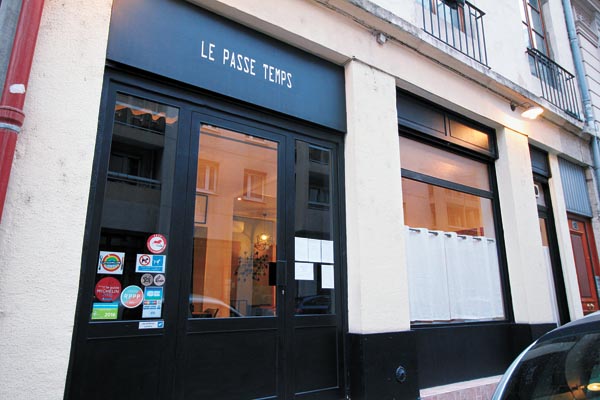 Did you actually notice when the reviewers came?

No, I didn’t. The announcement for the newly starred restaurants was scheduled to come out on Feb. 1 [Monday], and a call came through Friday night for me. It was an official from the Michelin Guide who told me that my restaurant got one star. I thought I was hallucinating. I thought they would have contacted earlier if I were to be included on the star list. I always thought I would burst into tears when I got my first star, but once I got it, my body responded more with shivering than tears.

It has been a little bit over a month since the news broke. How did your colleagues react?

There are about six one-starred restaurants in Lyon, and all of the chefs stopped by my restaurant on their way to work to congratulate me. They told me never to pay attention to others’ jealousy and continue doing what I want in order to keep the one star because living as a one-star chef is something amazing. I was thinking if I were talking to Korean people, they would have said something like, “Work harder and earn two stars.” Another more exciting thing is that many of the restaurant regulars made reservations just to come in person and congratulate me. I thought I was right to work hard to have so many regular patrons.

Why do you think your restaurant earned such an honor?

I don’t think I deserve it. I thought the star would come few years later, and I didn’t think that this small restaurant would earn such an honor because all other Michelin-starred restaurants I have been to were fancier. Even though I don’t intentionally try to include some “Korean” elements, the French sense the subtle difference. I think my forte is cooking food that is very much French but is accompanied by some non-French sentiment, and I think many of my guests love that about my food. Don’t you think this is the advantage French-cooking chefs with foreign backgrounds?

Have you considered making more dishes that are inspired by Korean ingredients or Korean dishes? The foie gras with broth felt both French and Korean.

I have considered it. But what stopped me was that chef Yim Jung-sik already got attention for his creations based on Korean dishes in New York. If I don’t create my own style, it would be so easy to get the title of the second Yim Jung-sik, which is the last thing I want. However, that doesn’t mean that I don’t ever try to make anything with hints of Korean dishes. Since I know what combinations of ingredients make dishes taste more Korean, I do try them in French dishes. 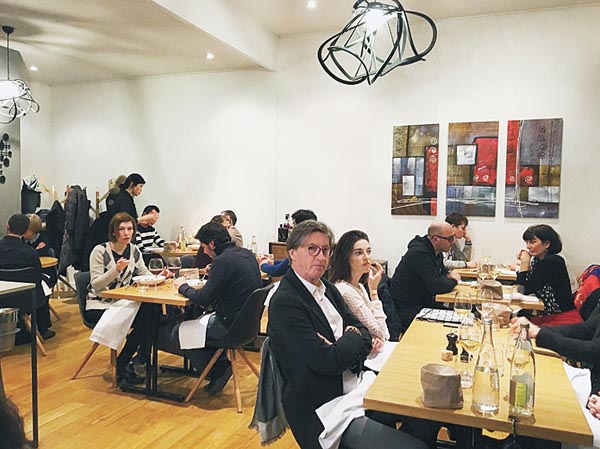 One of the restaurant’s signature dishes is pan-fried foie gras in anchovy broth, garnished with gim (dried seaweed) and radish. [LEE SUN-MIN]`

The foie gras dish is one of the signature dishes of the restaurant and it is the only dish that has stayed since the very beginning. It was first served as an amuse-bouche, and it was both good and bad, as some had higher expectations after this dish of what was to come. The broth is made with anchovies and I was so determined to “kick ass” in the French food scene with this one.

You are known as the first Korean chef to open a restaurant in France. Why did you set your mind on opening your own place?

I was interning at one three-starred restaurant, and then I got to see what my life would be like after 10 years of working in the field. It seemed like many experienced chefs also have a hard time finding good job opportunities. That moment I thought I wanted to do something on my own, and came back home and talked to my wife about my plan: “Let’s open a restaurant, and it can be as small as one with two tables so that I can cook and my wife can serve.” She said it was the most practical thing out of all the things I had said and has supported me ever since.

Why do you only have Korean staff?

I’m tough. I don’t think many French chefs or interns could hold up. I don’t do anything special, but there are some things known without saying among Koreans in the kitchen, and the dynamic might be different when there are other chefs who speak different languages. For one thing, for staff meals, we eat Korean food, so I don’t know whether non-Koreans chefs would be OK with it. Many aspiring French chefs send over their resumes, but I’m just comfortable with working with Korean staff for now.

Another reason is there are many Korean people who currently intern or work at restaurants in Korea who want to have experience working at a restaurant in France. I want to give them more chances so I can see more Korean chefs opening more restaurants in France or elsewhere.

How did you get funds to open a restaurant?

My parents gave me a little help, but the majority comes from loan I took out from a French bank. I wrote my business proposal and knocked on the door of every bank in France I know of, but it was hard to get approved as a foreigner without a standing visa. The last one I tried accepted my proposal.

Since I didn’t have much to begin with, I tried doing everything by myself. I spent 6 million won [$4,900] buying paint and other interior design items and renovated the interior with friends to save money. I cried every day while the construction was going on, for about a month and a half. Fresh paint kept coming off the walls and drilling a hole on one side of a wall would end up with a hole showing through on the other side. We are renovating again this summer, and this time I’m definitely hiring help.

What has changed over the course of two years, as you have earned a reputation in the field, culminating in a Michelin star?

Before, when vendors give me not-so-high-quality ingredients, I couldn’t say much because I was afraid they might stop giving me items. I sometimes got overwhelmed and forgot to place orders for the following days or weeks and had to buy more expensive stuff at the nearest market. However, now the vendors keep records of my purchases and call me regularly to tell me that I might be running low on some items and it’s time to stock up.

Even with wines, wineries tend to have certain amount of supplies and it is hard to get bottles unless you prove that you are worth getting wines. Sommelier Ha Suk-hwan knocked on the doors of wineries many weekends to find the wines that can best accompany the food. We struggled a lot with it, but after the Michelin star, some wineries have called up and asked if we would want their wines.

But out of everything, one thing I really like now is that I can afford to hire more staff to take some of the burden off the current staff who are working hard in the kitchen and in the hall.