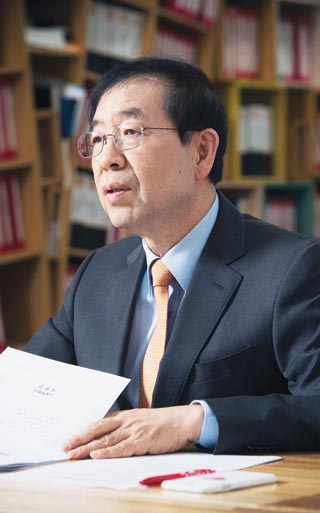 
Following the untimely schism among the liberal opposition parties before the general election in April, many observers have been paying attention to the next moves by Seoul Mayor Park Won-soon, a member of the main opposition Minjoo Party of Korea.

While Park has remained relatively quiet and been on the outskirts of the political arena, pundits don’t expect that to last long. They cannot comprehend Park satisfied in remaining a spectator as Rep. Moon Jae-in, former chairman of the main opposition Minjoo Party, and Rep. Ahn Cheol-soo, co-chairman of the People’s Party - a spin-off liberal party aiming to diversify Korea’s polarizing two-party structure - hedge closer to becoming the country’s next potential presidential candidates.

The JoongAng Ilbo recently met with Mayor Park to inquire about what he intends to do about the 2017 presidential election. The following is an edited excerpt from the interview.

Q. Have you considered running for president?

A. Politics for me is about ensuring the city administration of Seoul is well taken care of. If I dream on while the city is left to its own, what will happen to its citizens? My first concern is always for Seoul and its residents.

Does that mean you will simply remain Seoul mayor - without any other titles - until June 2018, when your term is complete?

Yes, because that is what Seoul’s residents want.

Forgive me for asking again, but are you determined to complete your mayoral term until June 2018?

You have adamantly denied any plans for a presidential run, so why does the media continue to portray you as a likely contender?

I don’t know. I’ve always said just what I told you. Perhaps you should ask the reporters.

There are fears that the Minjoo Party could struggle to secure support in the capital area, including Seoul, in the presidential election with the rise of the People’s Party.

Both parties must unite in solidarity. I will help, of course, if my assistance is needed. But it is difficult for me to step forward [without being asked to assist in the first place].

Rep. Moon Jae-in, the former chairman of the New Politics Alliance for Democracy (NPAD), now the Minjoo Party, suggested in November to divide the leadership of the NPAD three ways, with you and Ahn Cheol-soo alongside him. You reacted positively to this proposal at the time.

As a civil servant, it’s difficult to have any real influence in the National Assembly. No matter how important the general election is, a mayor’s role in the matter remains limited. I suggested “helping out” with his suggestion at the time because I feared the schism in the party would worsen. I thought it might help if I was included [in adding some sense of solidarity].

Despite your endorsement of Rep. Moon’s proposal to divide the party leadership three ways, Ahn left the NPAD to create one of his own, the People’s Party.

In times of internal division, leaders need to be creative in competing with each other to gain public trust. All in all, the Minjoo Party and People’s Party will have to unite to create a new brand of politics. Politicians should think about what the people need and want, instead of bulldozing with sheer self-will their own political goals.

It seems you are close to both Ahn and the Minjoo Party.

Politicians should stay away from getting involved in factional struggles. Former German Prime Minister Willy Brandt, the mastermind of Ostpolitik, was the leader of the Social Democratic Party of Germany, yet the country’s former president, Richard von Weizsacker, a member of the Christian Democratic Union of Germany, always supported Brandt. That’s why Germany’s unification was possible. In Korea, policies are overturned amid factional struggles once a president leaves the office.

Do you have any plans to play a specific role in uniting the Minjoo Party and People’s Party?

If I am given a role, I will try my best to fulfill it. But I will not act first without being asked.

The Minjoo Party put forward Kim Chong-in to head its emergency committee. Have you spoken with him?

I have not met with him, but we have been in touch. My job as the mayor of Seoul does not directly relate to the affairs of the party, anyway.

Some criticize your policy of financial support for unemployed youth as a populist appeal.

The ruling Saenuri Party is wary of your financial support policy for the city’s 25 districts that amounts to billions of won annually. They think you’re creating your own fan club.

(Laughs.) Fan clubs mean that there are people happy with my city governance. I provided financial support while reducing debt by nearly 8 trillion won - I hope those details get more news coverage.

With the onset of the Seoul Station overpass project, which seeks to transform the old overpass into an elevated park, many textile industry workers appear to have left the area.

That’s not true. The textile markets in Manri-dong, Cheongpa-dong and Dongdaemun Market, central Seoul, and Gongdeok-dong, western Seoul, were dying in the first place. They will actually be brought back to life by the overpass project because people will populate the roads instead of cars.

Some people have complained that the traffic near Seoul Station has became more hectic with the start of the overpass project.

It’s been four years since you assumed office as mayor of Seoul. What are some of your proudest accomplishments?

I am proud to say that Seoul’s global status has improved during my term. With more than 1,000 redevelopment projects, Seoul was a city of attics, with more than 50 percent of the city area occupied by apartments. Human value was neglected.

But after I became mayor, the city found its place. Some effective projects include humanizing areas near the Seoul Station overpass, Seun shopping center and the Seoul Wall; restructuring the public institutes affiliated with the Seoul Metropolitan Government, as well as Seoul Metro Line 9; and reducing vast amounts of city debt.

Under former Seoul Mayors Koh Gun, Lee Myung-bak and Oh Se-hoon, the city debt rose from 7 trillion won to 20 trillion won. I reduced this amount back to 7.8 trillion won. In my time as mayor of Seoul, I also reaped 14 trillion won worth of profit and expanded the job market, creating 12,000 more jobs.

Economic democracy and I go way back. I created a committee for economic democracy when I was secretary general of the People’s Solidarity for Participatory Democracy; we abolished the mandatory radio fee of 13,000 won per person, returning trillions of won to the people. As Seoul mayor, I continued to promote economic democracy, limiting the power of franchise corporations under conglomerates and making sure big retail corporations had at least two days to close per month. Combining such policies, I intend to announce the Seoul Economic Democracy Master Plan.

Any bad news for conglomerates or the rich in that master plan?

No, economic democracy is a win-win game. Conglomerates should also do well in business ... but they should do so while being careful not to exploit midsize company workers and the self-employed. It’s important for different sectors to reach a point of compromise.