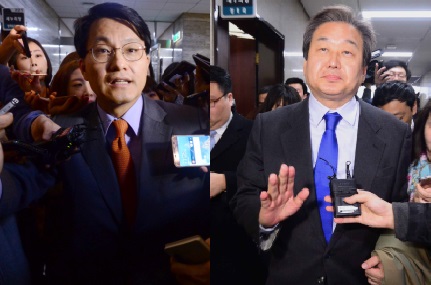 Left: Rep. Yoon Sang-hyun walks past reporters in the National Assembly after his request to meet with Saenuri Chairman Kim Moo-sung, right, was rejected Wednesday. Right: Rep. Kim leaves his office after refusing to speak to Yoon. [NEWSIS, PARK JONG-KEUN]

A loyalist and former political adviser to the president found himself mired in controversy this week after a local broadcast station unveiled a damning audio clip in which he said that the ruling Saenuri Party leader should be “weeded out” of the conservative bloc’s nominations for April’s general election.

The report, aired Tuesday by the right-wing cable network Channel A, exposed deep fissures between the ranks in the ruling party loyal to President Park Geun-hye and the lawmakers against her, including Saenuri Chairman Kim Moo-sung, 64.

In the recording, Rep. Yoon Sang-hyun, 53, can be heard telling an unidentified person over the phone that “Kim Moo-sung should be crushed,” and that he would “have him crushed tomorrow.”

“I’m prepared to discuss this with Chung Doo-un,” Yoon said.

“I’m going to have that [expletive] plucked out first. He’s not going to be nominated.”

Saenuri Rep. Chung recently made news headlines when he alleged late last month that he had heard from Kim that a core member of the pro-Park group had conveyed to Kim a “hit list” of 40 lawmakers the president allegedly wanted to wipe out of the party.

It remains unclear whether Kim and Chung are on such a list, though political analysts believe the two lawmakers could stand to benefit from the revelation: If the Saenuri Party’s nomination committee does decide to exclude the 40 sitting lawmakers from the nomination, it would likely prove that a list exists.

Kim later told the local press that the allegation was a “rumor” and that he had never told anyone anything about a list.

Although Channel A left Rep. Yoon anonymous in its Tuesday report, the Incheon lawmaker admitted to making the statement later in the day via a text message sent to local media. In it, Yoon claimed he was “drunk” and “utterly upset” in the call made Feb. 27.

He added that earlier in the day, he had read in a local newspaper that Kim had mentioned a hit list.

While it remains unknown exactly who he was calling that night, Yoon told the JoongAng Ilbo that he was “probably” talking with a “close reporter,” but that he wasn’t sure because he was too drunk to remember.

It is also unclear who recorded Yoon. Channel A only mentioned that the clip was “taken by a third person” who happened to be nearby.

Chung said Tuesday that he received a call from Yoon on the afternoon of Feb. 27, but that he could not take it because he was in a meeting.

Kim has remained silent on the matter and refused to meet Yoon on Wednesday.

Yoon told reporters outside Kim’s office that Kim was not taking calls and that he felt deep remorse for the chairman.

He was also quick to add that the situation was a “plot” against him.

Anti-Park forces in the Saenuri Party denounced Yoon and called for him to be punished by the party’s ethics committee.

Hong Moon-pyo, a secretary general in the Saenuri Party and a member of its nomination committee, said Wednesday in an MBC radio show that Yoon’s comment was a “disgrace” to the party and that he should “either voluntarily retire from politics or decide on another place.”

As to whether the incident would affect Yoon’s chances of being nominated in the April 13 general election, Hong said the committee was screening controversial comments and that the situation highlighted a number of issues within the ruling party.

Yoon entered politics in 2002 and has since served as one of President Park’s closest aides.