‘Comfort women’ rally their cause in the U.S.

‘Comfort women’ rally their cause in the U.S. 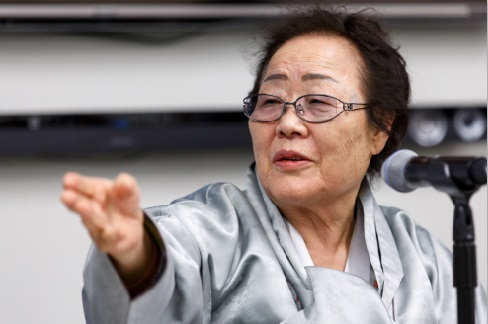 Korea’s “comfort women,” who survived sexual enslavement at the hands of the Japanese military during World War II, have taken to New York and Washington to demand a proper apology and legal responsibility from Tokyo, despite a previous agreement forged in December that was meant to resolve the issue.

“If the Japanese government makes an official or sincere apology to the comfort women victims, the issue will easily and clearly be resolved,” said Lee, a longtime activist. “But it still continues to deny the existence of comfort women; [Prime Minister Shinzo] Abe and the Japanese Cabinet members need to wake up.”

The previous agreement, struck on Dec. 28 between Seoul and Tokyo to resolve the issue, includes an apology from the Japanese government and a pledge to set up a 1 billion yen ($8.8 million) fund backed by state budget for the former sex slaves. The foreign ministries of Korea and Japan agreed that the settlement was “final and irreversible” so long as Japan faithfully followed through with its promises.

However, Abe and other right-wing Japanese leaders have made remarks since the agreement that deny its military used any force in mobilizing the women into frontline brothels.

“We have rallied in front of the Japanese Embassy [in Seoul] for 25 years, through rain and snow, for a proper, official apology from Japan,” Lee continued, adding that she could not accept the governmental deal.

On the same day, a resolution urging the Japanese government to apologize and teach in its schools an accurate version of history was submitted to the New York City Council.

“I fully support the comfort women survivors and their families in their quest to seek a genuine and heartfelt apology to them,” Laurie Cumbo, chairwoman of the New York City Council’s Committee on Women’s Issues, said at the press conference.

Later Tuesday, Lee made another address at the United Nations headquarters at the UN Correspondents Association in New York, where she elaborated on her experience being coerced in 1943 into a Japanese military station in Taiwan.

Another survivor, 89-year-old Kil Wan-ok, also a member of the Seoul-based civic organization Korean Council, also spoke Tuesday in Washington to declare that she “could not accept the government agreement.”

On Monday, the UN Committee on the Elimination of Discrimination against Women (Cedaw) released a report detailing how Japan had not fully addressed its obligations to comfort women victims in accordance with international law, in particular because Japanese officials have denied the women were coerced.