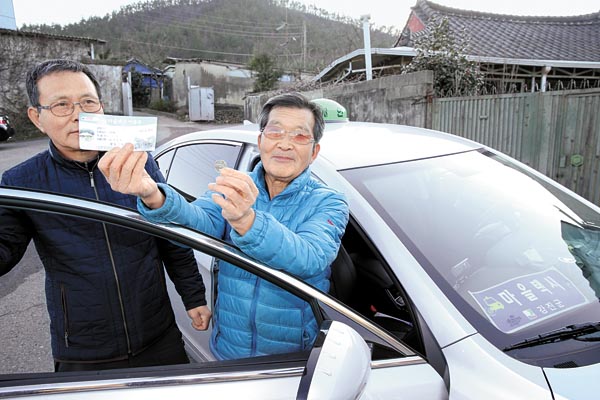 Jo Nam-yeon, right, holds up his taxi coupon and a 100 won coin after getting dropped off at his home in Chilryang-myeon in Gangjin County, South Jeolla. [JANG JEONG-PIL]

For the extremely low price of 100 won (8 cents), the 67-year-old no longer has to walk 30 minutes to the bus stop to the detriment of her aching body.

Instead, she can take a specialty taxi, which provides rides for nearly nothing in remote areas where access to public transportation is difficult.

The concept has become extremely popular among residents in rural places, particularly the elderly, and allows them to travel to hospitals, five-day markets, neighboring villages and bus stations.

Kim, who lives in a remote village in Gangjin County, South Jeolla, previously had to use a walker to reach the bus stop 30 minutes, or about 2 kilometers (1.2 miles), from her house. The journey was painful, especially in the winter and summer months.

But thanks to the 100 Won Taxi, which arrives at her front door with just one phone call, she has a much easier time getting to the hospital.

“I barely thought about going outside because of the pain in my hips,” Kim said. “Now I enjoy going to nearby villages with the other seniors.”

The 100 Won Taxi began in 2013 in South Chungcheong and was initially called the Village Taxi. The service is currently available in five counties in the province, including Seochon County, where local government officials benchmarked the project.

A similar project, Happy Taxi, is also in operation in Pohang and Uiseong, Seongju and Bongwha Counties in North Gyeongsang. The taxi travels about seven or eight times between remote areas and local villages during the market seasons.

The 100 Won Taxi is most prevalent in South Jeolla, which has the highest elderly population in Korea ? 22 percent of the district’s demographic. The province initiated the project in about 363 villages across 14 counties and cities to reach 11,076 people.

Ulsan, meanwhile, has the Small Trip Taxi, which has been in operation since January. Small vans run in remote areas where it’s difficult to access public transportation, with fare costing 1,000 won per trip.

“As Korea moves toward becoming an aging society, the number of elderly people in agricultural and fishing villages has increased, leading to a rise in the demand among the elderly for travel options to nearby health centers and traditional markets,” said Ulsan Mayor Kim Gi-hyeon. “The project meets the needs of the elderly who live in remote places and have difficulty accessing transportation.”

Fees for the taxis differ place to place, though the way in which the projects operate are consistent: Municipal governments subsidize the difference between the fare and the actual cost required to get the passenger to his or her desired destination.

Yet despite criticism that the project is a populist policy, the initiative has proven immensely popular among rural villagers, a major reason why local governments have expanded the business.

South Jeolla has widened the project to 645 villages to serve 19,891 people and increased the budget from 1,800 billion won last year to about 3,800 billion won this year.

Ulsan even allowed its residents to determine the running schedule of the taxis following complaints about their infrequency.

Still, some local governments are hesitant to implement the project out of fear it could be viewed as a waste of the budget. And other pundits have called for municipal governments to carefully budget and systemize the project by setting age and distance limits to minimize potential losses.

Afraid that the 100 Won Taxi project might end up another populist welfare policy, North Gyeongsang initially used small buses rather than cabs.

“If local governments simply expand welfare services without preparing the appropriate budget, the harm eventually goes to the residents,” said Choi Jin-hyuk, a professor of the Local Autonomy Administration Department at Chungnam University in Daejon. “Officials should decide whether to implement the project depending on the funding situation.”

Seongnam, Gyeonggi, has operated a taxi for the disabled since 2006 that comes equipped with an incline and stabilizing equipment.

According to Oh My News, taxi fare was reduced in October to 1,200 won for every 10 kilometers, down from about 4,000 won. Officials are planning to expand the business to Seoul and Incheon.