Justice elusive in the Philippines

Justice elusive in the Philippines 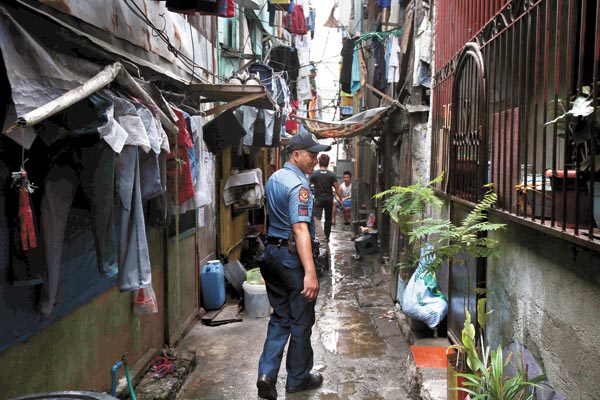 A Philippine police officer patrols a shantytown in Manila on Feb. 3. Despite its proximity to an adult entertainment district, there is not a single CCTV in the neighborhood. [OH JEONG-TAEK]

On Feb. 5, 2013, a 42-year-old Korean resident in the Philippines was found dead on a beach in Cebu with a fatal bullet wound.

The man, known only by his surname Seo, moved to the Philippines in 2009 and operated a tourism agency. The previous day, he had dinner with acquaintances and then went missing.

Three years after the incident, there are no leads on Seo’s death. There were no witnesses. There were no CCTVs in the area. It is not even known where he was shot.

Until local authorities come up with some hard evidence, Seo’s death is bound to remain a cold case ? like many other cases of violence against Koreans in the Philippines.

The JoongAng Ilbo conducted an investigation between Feb. 1 and 5 into 30 Koreans killed in the country over the past three years. According to documents obtained from the Korean National Police Agency and the Ministry of Foreign Affairs, there was no arrest of a suspect in 60 percent of the investigations. In 11 cases, no suspects were even identified.

Just as troubling, even when decisive evidence was found and a suspect identified, there was insufficient manpower and drive within the local justice system to successfully track down, arrest and prosecute a suspect.

Corruption is the core of the problem, said Lee Ji-hoon, the 33-year-old superintendent of the Korean Desk in Angeles City, where several of the murders took place. “I often hear local police say, ‘If I don’t get a kickback, the prosecutor will get it, and if prosecutors don’t, a judge will get it and release the suspect. So I might as well take the kickback.’”

Unlike in Korea, the Philippines does not allow emergency arrests in which suspects can be held for up to 48 hours without an arrest warrant.

Unless the assailant is caught in the act or there is hard evidence to get an arrest warrant issued, it is difficult to take into custody key suspects and they often disappear. 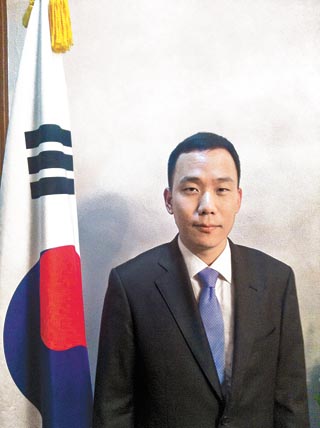 Likewise, there is a shortage of judges in the Philippines and it is difficult to meet the criteria for arrest warrants, which can sometimes take over a year to be issued.

“Only if criminals are arrested and severely punished will there be the lesson that people who kill Koreans will definitely be caught, and such murders can be discouraged,” said Park Yong-jeung, an official with the Korean Embassy in the Philippines that oversees police affairs. “That is not happening.”

Lax investigations have led to notable examples of injustice for some victims.

Lee Yeon-ho, a pastor from Korea, stayed at a theology school in the Philippines for three months starting in February 2013.

At that time, the school was involved in a scandal. Its officials were accused of forcing students to do construction work. Though he was on a temporary visa there, Lee was mistaken as one of the officials of the theology school involved with the abuse and sent to jail.

Hong Deok-gi, another official with the Korean Embassy in the Philippine supervising police affairs, said, “We have determined that Pastor Lee was unfairly accused and jailed. While this is difficult to understand from our perspective, there are such astounding cases.”

Over 1.2 million Korean tourists visit the Philippines each year.

The Korean Desk was established in 2012, and officers from the National Police Agency are stationed in the Philippines to work with local police to deal with cases involving Korean victims. 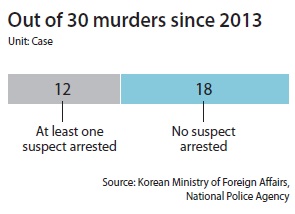 The National Police Agency will spend 7.5 billion ($6.2 million) won through 2018 on equipment for the Philippine police for investigations such as vehicles and motorcycles.

Their efforts to investigate the killings of Koreans are producing results.

On Dec. 20, a 56-year-old man known by his surname Cho was fatally shot in Batangas, south of Manila. He lived in the country 20 years and operated his own construction and real estate leasing business.

Korean investigators analyzed CCTV footage and conducted profiling in order to trace the vehicle of the assailant. They concluded the murder was a contract killing rather than a simple robbery.

Local police suspect Cho’s 51-year-old Filipino wife was the mastermind behind the killing. The pair was in the process of annulling their marriage before Cho was killed.

Seo Seung-hwan, a 39-year-old superintendent with the National Police Agency’s Korean Desk in Manila, said that over the past four years he has cooperated with the Philippine police on investigations of 300 cases. Seo has headed the Korean Desk in Manila since it was begun in May 2012. He moved his family to Manila and works at the Philippine National Police’s investigation bureau.

The Korean Desk “takes on all Korean-related cases regardless of type or region,” he said. He has mediated in disputes involving Korean residents in the Philippines, caught escaped assailants and tracked gang activity. He’s run up 60,000 kilometers (37,282 miles) on his car in Manila.

“The investigation environment is very inadequate,” said Seo, when asked his greatest challenge in the Philippines. “In Korea, checking telecommunication and CCTVs is basic operating procedure. But here, many places don’t have proper CCTVs. And even if there is a prime suspect, we cannot conduct an emergency arrest, and it can take six months to over a year just to get an arrest warrant issued.”

Four additional Korean police officers have joined the Korean Desk this year. They are focusing on regions where many Koreans have been killed, such as Cebu or Cavite.

“We are continuously bolstering our cooperation with the Philippine police authorities,” Seo added. “But the judiciary system is full of corruption. At first, there were police that wouldn’t move unless they were paid. But things have gotten much better as we have built trust.”

He continued, “The Philippine police officers we work with say, ‘The Korean Desk is observing us with eyes wide open, so how can we slack off?’”