'Shaq of the KBL’ carries Egis to big victories

'Shaq of the KBL’ carries Egis to big victories 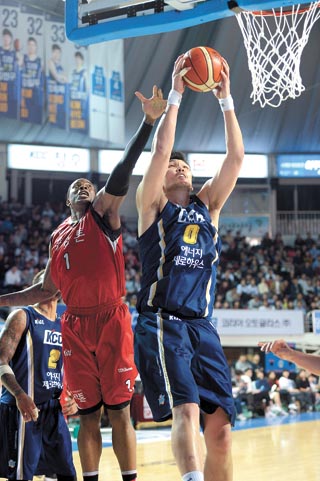 Ha Seung-jin of the Jeonju KCC Egis is known as the Shaquille O’Neal of the Korean Basketball League (KBL). He’s slightly taller than the massive NBA center at 2.21 meters (seven foot two), and dominates under the basket for the Egis in both offense and defense.

In the first semi-final game against the Anyang KGC on March 7, Ha picked up 15 points and 16 rebounds for the Egis in a 80-58 victory. He also grabbed five offensive rebounds against KGC’s Charles Rhodes. Assured that Ha would grab the ball off the rim, Egis players were able to shoot beyond the arc with confidence, draining nine 3-pointers throughout the game. Subsequently, in the second game against the KGC on Wednesday, Ha scored 14 points while grabbing 16 rebounds to help the Egis edge KGC 99-88.

“The Egis is just too dominant under the basket with Ha inside the key,” KGC head coach Kim Seung-ki begrudgingly admitted after the game.

Ha played for the Portland Trail Blazers in the NBA and NBA Development League from 2004 to 2008 before coming back to Korea to join the Egis for the 2008-2009 season.

Ha played for the Egis for four years until his conscription in 2012. After completing his two years of public service, Ha re-joined the Egis in 2014 to bolster the team under the rim. Ha was a key player for the Egis when the team won KBL championship titles in 2009 and 2011.

But by the time he returned from his public service, the Egis had fallen to the bottom of the league, and it took Ha until this season to be able to pull the team up.

Frequent injuries have dogged Ha throughout his career. Some fans even denounced him with nicknames like “glass body” or “human vegetable.”

Ha has also often been accused of exaggerating the severity of his injuries.

When Ha broke his nose in January 2015 after being elbowed by Leo Lyons of the Seoul Samsung Thunders, he was booed off the court by a female fan who yelled that Ha was faking an injury once again. The player lost his temper and tried to rush the bleachers, only to be restrained by his teammates and security guards.

Ha is currently suffering from chronic degenerative arthritis and a herniated lumbar disc. He has also torn most of the ligaments in both of his ankles. But regardless of the injuries, Ha’s determination and spirit keep him going on the court.

This season, nobody has been accusing Ha of slacking off. He trained hard, losing about 15 kilograms (33 pounds) before the season began. Owning to his physique and determination, Ha often was able to pull off big plays. Egis could count on him to grab rebounds when needed. Eventually, Ha led the league in rebounds with an average of 7.55 per game to help the Egis capture the first regular season first place title in the history of the franchise.

When asked about how the Egis will do against the KGC in the semi-final, Ha remained humble.

“KGC is not a weak team,” he said. “The Egis and I cannot go into the series with our guards down.”

The Egis has already acquired two wins in the semi-finals and will take on the KGC tonight at 7 p.m. to play the third game in Anyang. Depending on tonight’s result, the Egis will either move up to the KBL final to take a shot at the championship title for the first time in five years, or they will continue in the semi-finals and play the KGC again on Sunday.