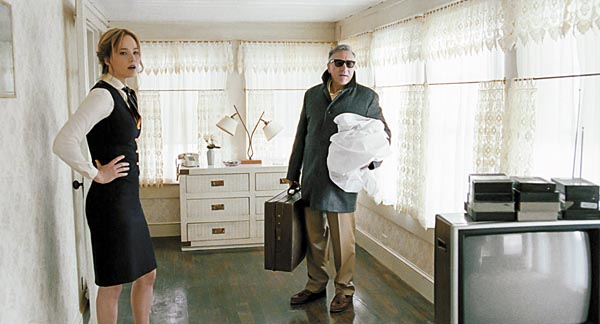 It seems almost impossible for a single mother to become a self-made millionaire. However, Joy Mangano did it.

The film stars Jennifer Lawrence as Mangano, Robert De Niro as her father, and Bradley Cooper as Neil Walker, an executive at the QVC home shopping channel.

Mangano has two children and a grandmother to take care of. She works every day and night but things are not going well.

One day, Mangano breaks a wine glass and suddenly an idea pops into her head. She begins to work on creating a product that she hopes will take the world by storm.

Despite her efforts, the business does not go well. But she doesn’t give up.

The film is based on the real story of Joy Mangano, who is the president of Ingenious Designs LLC and the face of HSN, the TV shopping channel.

Director David O. Russell wanted to feature the surprising story by not limiting the scope to the life of Mangano, but portraying it in a broader aspect, including the stories of other successful women of our time.

After a woman has waited 15 years to meet a man, the chase begins.

Hee-ju, played by Shim Eun-kyung, cannot forget Ki-beom, played by Kim Sung-oh, the man who killed her father in front of her when she was a young girl.

After 15 years, the murderer got out of prison. Around that time, a series of murders almost identical to the previous cases starts to occur.

What will Hee-ju do?

For Shim, this is her first time playing the lead in a thriller movie. She previously starred in films such as “Sunny” (2011) and “Miss Granny” (2014).

Director Mo Hong-jin originally thought of the main character as a male. But after watching Shim act, Mo decided to change the gender and added a more sophisticated description of the character’s emotions.

Furthermore, he made Hee-ju’s room perfectly depict the trauma from witnessing her father’s death. Thousands of news clippings and philosophical notes are stuck everywhere, creating a dark, isolated atmosphere.

More surprisingly, Kim lost 16 kilograms (35 pounds) for his role of a serial killer in only four weeks.

In the snowy cold, a man, Jeong-wu (Kim Tae-hun), walks toward an asylum which is run by nuns for treating alcoholism. He cannot differentiate between reality and dreams anymore.

Through the gradual interactions with Sister Maria, played by Park So-dam, who helps him fight his addiction, Jeong-wu gains courage. However, he again falls into the abyss of his addiction after he meets a hunter who is carrying alcohol in his bag.

The film portrays the pain of each character without any interference from outside factors, except for the cold, snow and the forest.

All the characters have painful histories that need care. But the process of healing does not come at once. Just like in reality, all have to overcome certain hardships. Thus, the development of the plot in the film does not rush in that manner.

The movie is set at Noan Catholic Church located in Naju, South Jeolla.

It was the first church built in the Naju area in 1927.

Park has been working constantly since her film “The Priests” in 2015. Her delicate portrayal of a young nun as a lonely girl and a person of religion will touch the hearts of moviegoers.

There is a small area that is home to only a few people who intentionally isolate themselves from the outside world. There are 15 children and mothers and only one grown man, Gregori, played by Vincent Cassel, who is the leader of the group.

They have gathered under the roof of Gregori in order to protect their beloved ones from the world that is alleged to be terrible.

Gregori makes his own rules that everyone must obey. But this seemingly peaceful place hides unspeakable violence: The children are trained as assassins.

However, Alexander, played by Jeremy Chabriel, who is also an assassin, starts to feel uncomfortable toward the world that Gregori has created.

The film was the opener of the 2015 Jeonju International Film Festival, chosen for presenting a beautiful but a cold-blooded world. Newbie director Ariel Kleiman has been acclaimed at various film festivals, including Sundance in the United States.

Kleiman was inspired by the story of the Sicarios, young assassins in Columbia.

Thus, the film focuses mainly on the boys and how they think and feel when they carry out their violent duties.

Big Ben, the Houses of Parliament and the London Eye are destroyed in terrorist attacks. What is happening?

The funeral for the British prime minister is taking place in the middle of London, and the leaders of the top 28 nations have gathered.

Terrorists cannot miss the chance to attack London, which would spread chaos globally. But the terror attacks being planned for the main landmarks of London are just the beginning. Along with five leaders being killed, even the president of the United States is abducted by the terrorists.

In order to find a way to stop the terror, Secret Service Agent Mike Banning, played by Gerard Butler, cooperates with MI6.

The film, directed by Babak Najafi, is a sequel to “Olympus Has Fallen” (2013), which was directed by Antoine Fuqua. It also starred Butler in the role of Banning. However, in the first movie the terror attacks targeted the White House.

This time, the setting has changed to Europe. Despite the changes, the main target of the terrorists remains the president of the United States and it is Banning’s duty to guard the president with his life no matter what happens.

Jin-sang (Ahn Bo-hyun) loves his younger brother Jin-ho (Lee Ho-won) and tries to take care of him as well as he can.

Jin-sang is a well-known troublemaker. He is being chased by the police as a suspect in a murder case. But even though he does not take care of his own life, he cares deeply for Jin-ho and wants to do everything for him.

Whereas Jin-ho is a high school student who dreams of being a singer. He eagerly participates in auditions, but he constantly has to swallow defeat.

The conflict between these two increases as their situation gets more out of control. How will they fix their relationship?

Director Kim Ji-yeon wanted to depict the love of brotherhood that is taken for granted in everyday life.

She sophisticatedly outlined the opposite characters of the two brothers, which represent the reality of ordinary families with siblings.

For both Ahn and Lee, this film is their debut on the big screen. Lee, also known as Hoya, is a member of the K-pop boy group Infinite. He has been gaining attention since appearing in the drama series “Reply 1998” (2012) and “Mask” (2015).