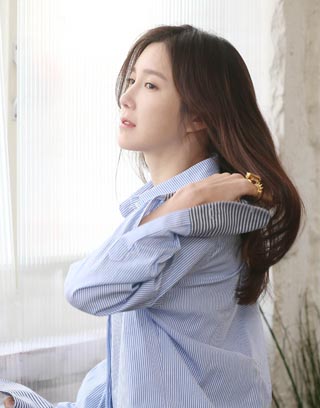 Actress Lee Ji-ah clearly seemed joyful throughout the interview. The hoopla years ago about her divorce and the end of her secret marriage to rock star Seo Taiji was crazy to say the least. But now that she has put it all behind her, Lee has come back in a rather daring way.

Her first-ever film, “Musudan,” hit the big screen on March 3, but it did not seem to worry her much. The thriller deals with the unexplained cases of soldiers who either go missing in action or are found dead in the demilitarized zone between North and South Korea.

Lee plays First Lt. Shin Yoo-hwa of an elite special task force. “Filming pretty much the whole film in the mountains, I accidently ate a fly,” the actress recalled. “I remember passing out once even. There were no perks to being the only woman on the team.”

Q. Why did you choose “Musudan” as your first film?

A. I never spend much time choosing which film to be in, nor do I regret it afterwards. When I looked at the synopsis, it just seemed interesting digging into the unexplained cases, not to mention playing a female military officer deployed to solve such a mysterious case. People see me as meticulous, but that is not true.

What was it like to be part of a film? Was it unfamiliar to you?

It was not quite like what I’ve been hearing. I imagined a movie shoot would give me more time in my hands than a drama shoot. The whole crew was on their toes trying to stay on schedule, so we barely had time to monitor the scenes.

Are there any perks to being the only woman on the team?

There are no perks to being the only woman on the team (chuckles). It seemed so in the beginning, but as things got overwhelming, I was treated like just another person. We had a stunt double for me, except for this one day I had to do the whole thing. I guess with the military uniform on and camouflaging makeup, I must have seemed up to it.

You also write screenplays. Did the film inspire you to write?

Nope. I was an actress for this one and too occupied in doing that job. In fact, there is a lot of pressure in writing. I don’t wish my activities as a writer to become a big deal. It doesn’t help my acting career at the end of the day.

You try not to occupy yourself with too many dramas or movies, or at least, you didn’t appear in many at once. Why so?

I wish to do as many as possible. Of course, whether the proposal comes my way is a whole different thing. I have seen the drama I wanted to be part of slip away for whatever reason. It just isn’t under my control.

What kind of character are you usually pitched?

I used to be asked to play cheerful and funny characters with light personalities. These days, all are serious characters. I must look like a woman with a lot of stories.

But you do have stories, right?

Come on. That’s all in the past and behind me now, you know.

If the opportunity presents itself, I am all for it. You should connect me to Na Young-seok, producer of “Two Days, One Night” and “Youth Over Flowers” (laughs).

Do you still read Internet comments?

I don’t, but I hear about them nonetheless. Every time I hear about them, it just solidifies my decision to at least avoid seeing them firsthand. I can never grow thick-skinned no matter how many times I face them. For fear of them, I don’t even do any social networking activities, though I wish I could communicate with fans more.

How much of a drawing power do you say you have?

I have no idea. I can’t foretell how successful “Musudan” will be considering the uniqueness of the genre. Really, I can just live with the fact that I got to get back into acting through this movie. The whole crew put in so much work. I just hope many fans will go see it.