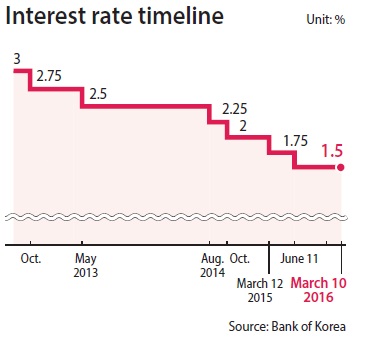 It’s becoming clearer that the Korean central bank will not rush to further loosen the nation’s monetary policy, even when market indicators have been pointing south.

Bank of Korea Gov. Lee Ju-yeol took a cautionary approach and decided to monitor the current situation by freezing the nation’s key interest rate at 1.5 percent for the eighth consecutive month. But the monetary policy committee member’s decision wasn’t unanimous this time around, as some voted in favor of a rate cut.

“It’s true that confidence in the economy has dropped sharply,” Gov. Lee said on Thursday at a press briefing held after the key interest rate decision was made. “It’s because various aspects of the economy have been sluggish while insecurity in the global financial market is having a substantial affect.

“There are certain expectations on the affect when pursuing interest policy but at a time when there are uncertainties caused by the external factors, the channels in which the monetary policy could influence the real economy could be limited.”

Market experts agree that the BOK is unlikely to lower the key interest rates in the immediate future.

“The BOK is likely to cut only when it has sufficient evidence that domestic consumption growth is slowing substantially, coupled with signs of reduced financial market volatility and a moderation in household debt growth,” said Joseph Incalcaterra, an economist at HSBC. “We forecast a 25 basis point cut to the policy rate in the second quarter following a downward revision to the BOK’s growth forecast in April.”

However, the biggest change by the governor is his less pessimistic view on the economy. Earlier, the central bank chief’s view was less optimistic, and included statements like, “Although spring has come, spring for the economy has yet to arrive.

But during the press briefing Thursday, Lee said that although his view on the current situation has not changed, he still believes positive signs are emerging.

“As I said a month ago, we are surrounded by uncertainties caused by growing downward risks affected from continuing struggles in exports and weakening confidence,” Lee said. “But there are also positive signs such as the rebounding of crude prices ... and U.S. economic data.”