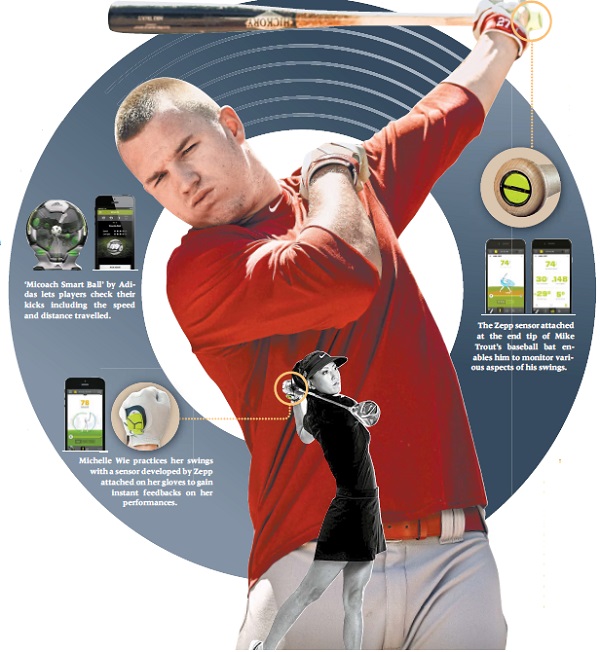 Technological developments that have changed everyday lives are now spreading into the world of sports.

Advances in equipment, ranging from baseball to golf, help players practice, develop and measure their skills beyond traditional methods.

In baseball, Los Angeles Angels center fielder Mike Trout does his batting practice with a peculiar device attached at the top of his hickory bat. Trout calls it his “Smart Bat”.

The “Smart Bat” is a regular bat with a digital sensor created by sports equipment manufacturing company Zepp. The sensor is attached to the top of the grip of the bat by a special holder. Once attached, the sensor can be connected to a smartphone app via Bluetooth and track various elements of a swing including form and angle. The swing data is instantly uploaded to the smartphone for the player to check.

“Zepp lets me look at my swing’s performance and progress so I can make the adjustments to improve at the plate,” Trout said during his interview with CBS Sports on Mar. 3. “For me, I want to have consistency throughout the season and this is the guide.”

Trout made his first appearance in the MLB in 2011. His batting statistics in the past five seasons stand at .304 batting-average, 744 hits, 139 home runs and 397 runs-batted-in. Only three years after his debut, Trout was named the Most Valuable Player in the American League in 2014. He is also a four time All-Star and has finished second in the American League MVP ballot in 2012, 2013 and 2015. Trout is considered one of the best young players in the MLB today.

One of the factors that Trout attributes to his success is the advanced technology he grew so fond of. “I often look through the visualization and [data] captures of my swing with my smartphones on the airplane while I travel with my coach,” said Trout. “The device makes it easier for me to analyze my batting form.” The device has been approved by the MLB to be used during practices.

Zepp also manufactures similar devices for golf and softball players. Michelle Wie is one of the professional golfers that take advantage of the Zepp technology.

Unlike the Zepp device for baseball which is directly attached to the bat, Wie places the sensor on her glove. The sensor creates 3D visualization of her swing and transmits the data to Wie’s smartphone app and provides analysis on swing form and biomechanics. The factors that go into the analysis include club speed, swing plane, tempo and hip rotation.

Zepp uses Internet of Things (IoT) technology, which is the network of physical objects that allows them to sense, collect and trasmit relevant data in accordance with their purposes.

Babolat, a French tennis equipment company, manufactures and sells tennis racquets that allow players to track information on their strokes and smashes.

Daedo Korea, which manufactures and sells electronic protective gears for Taekwondo, created ‘gen2’ that allows protective gear to distinguish the pressure balance among different types of kicks. The device is also imbedded with microchips that enable collection of big data for analysis.

Data collecting microchips are also being attached to wearable items. The NBA’s Golden State Warriors use training uniforms created by Catapult USA. The uniforms are attached with micro sensors which measure various data including players’ running distance, acceleration and deceleration speed and even the impact level during jumps and landings.

The device also measures the physical condition of a player to prevent injuries in the future. Thanks to the sensor, the Warriors are able to monitor the physical condition of its star guard Stephen Curry. The coaching staff can check Curry’s degree of fatigue during the season and have him rest when necessary. About 20 teams in the NBA have adopted the technology so far to monitor the conditions of their players.

At the Golf Show in Munich, Germany, last month, a golf ball named ‘Never Lost’ was introduced to the public. The ball transmits its location via a microchip inserted inside the ball, making it impossible for golfers to lose a ball. Adidas also has introduced its own smart product, named “Micoach Smart Ball” which permits football players to check the strength of their kicks as well as the speed, distance and spin.

Another technology that receives a lot of attention from the sporting world is ‘Virtual Reality’ (VR). Lee Ki-kwang, a professor at Kookmin University College of Physical Education, says, “The technology is adopted in extreme sports that people cannot participate in every day including sky diving and scuba diving. It is also introduced for sports that are affected by season and weather conditions such as skiing, snowboarding and golf. The size of the VR market in the virtual reality sports experience business, including screen golf and horseback riding, has already seen tremendous expansion.”

Some sports teams are using VR technology as part of their training simulations. NFL teams such as the Dallas Cowboys and San Francisco 49ers have already begun using VR devices for simulation trainings.

When asked about the advancement of VR technology, Korea Electronics Technology Institute researcher Jung Kwang-mo said, “We already have alternate reality technology that transcends virtual reality. The boundary between reality and virtual reality is getting blurred.”