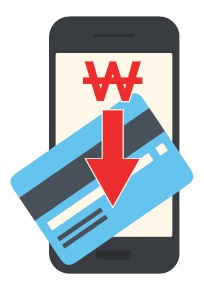 Local card companies and telecom carriers have launched special credit cards offering discounts for all new phones a day ahead of the launch of Samsung’s Galaxy S7 and S7 Edge.

According to the card industry on Thursday, the nation’s five major card companies, including Samsung, Hyundai, Hana, Woori and Shinhan, have joined with telecom carriers to offer discounts on monthly telecom bills for new card customers who buy a new device on a long-term installment plan.

The actual discount begins a month after sign-up and customers have to purchase a new smartphone under the 24-month or 36-month installment payment plan.

The Samsung Card that launches today offers discounts of 10,000 won to 20,000 won for SK Telecom users who newly sign up with the Galaxy S7 or S7 Edge. The new card will offer discounts for all future Samsung smartphones, including the Galaxy S and Note series.

“We’ve raised the discount rate this time, compared to the existing cards we jointly launched with telecom carriers,” a representative from Samsung Card said.

A Samsung Card holder can save up to 480,000 won when choosing to pay for the new device over 24 months, and up to 720,000 won when they choose a 36-month installment payment plan.

Woori Card introduced a new credit card in collaboration with LG U+. It offers discounts of up to 23,000 won every month for users who spend 1 million won or more in the previous month.

Unlike other card companies, Woori offers a discount of up to 20,000 won every month for all customers, as long as they use Woori Card to pay telecom bills. Woori also provides the discount for all purchases of new smartphones.