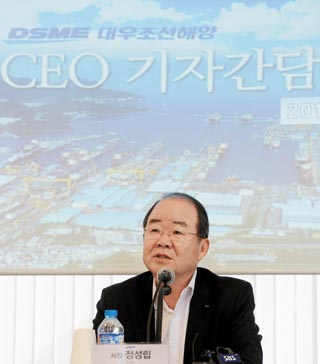 The financially troubled Daewoo Shipbuilding and Marine Engineering (DSME) will try to improve its productivity to a level it reached six or seven years ago.

After reporting an operating loss of about 5.5 trillion won ($4.5 billion) for 2015 earlier this week, the company’s CEO, Jung Sung-leep, said in a Thursday press briefing at the company’s headquarters in Jung District, central Seoul, that the company will try to bring its workforce down to around 30,000 to raise its current productivity rate of 70 percent to 90 percent, as it was in 2009 and 2010.

“This doesn’t necessarily mean that we will carry out a large-scale restructuring and cut massive numbers of employees,” Jung said. “The company performed its best when production efficiency was about 90 percent. We made about 12 trillion won in revenue with 30,000 employees during those times. In 2014, we made 14 trillion won in revenue with about 50,000 employees, which gave us only 70 percent productivity.”

In the shipbuilding industry, productivity is measured as the level of output against the amount of resources used, including the number of workers.

The CEO said the workforce would shrink gradually as subcontracted workers and temporary employees hired by affiliates stop working when their contracts expire. The company currently has a workforce of 42,000, including workers at affiliates, the company said.

“Such efforts are necessary since the overall global market conditions aren’t good due to low international oil prices,” Jung said. “In these market conditions, we plan to hire only 20 to 30 college graduates this year, most of whom will be majors in science or engineering.”

Jung said he expects the company to turn a profit in the first quarter.

“Most of our losses have been reflected in the past three quarters, and other negative factors like businesses that have been generating losses including wind power were shut down,” the CEO added. “We currently have about $10 billion worth of project orders, an amount that will keep us busy a full year even if we don’t win any additional contracts. Industry insiders expect overall market conditions including the offshore business to improve in the second half as current oil prices ranging around $30 per barrel increase to $50 to $60 per barrel. We expect to win $10.8 billion worth of contracts this year, which includes $6 billion from shipbuilding.”

The Korea Development Bank (KDB), a major creditor of DSME, concurred with the shipbuilder’s forecast. KDB said on Wednesday that DSME’s balance sheet is expected to improve this year, adding that unexpected losses are not expected this year since the company will start manufacturing liquefied natural gas (LNG) carriers. The company has the best LNG production technology in the world, it said.

“They now have work that they are good at, unlike offshore plants,” a KDB spokesman said.

Jung said he is working on improving the overall working environment. “Since I was named CEO last year, I saw many negative things inside the organization,” Jung said. “Employees didn’t communicate well and didn’t cooperate with each other. I’m trying to fix these things while keeping our ship manufacturing technology at its best level.”