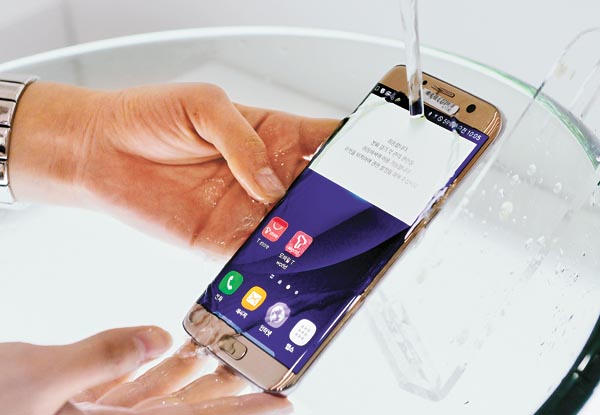 The waterproof function of the Galaxy S7 is displayed during a media event on Thursday at the Hotel Shilla in Jangchung-dong, central Seoul. [NEWSIS]

Samsung Electronics’ next-generation flagship smartphones, the Galaxy S7 and S7 Edge, go on worldwide sale today as much as 88,000 won ($73) cheaper than their preceding models, becoming the lowest-priced line in the Galaxy series.

The final price will depend on how much subsidies mobile carriers SK Telecom, KT and LG U+ will assign for the latest Samsung phones.

With the S6 series, the subsidies varied between 130,000 won and 210,000 won for the highest-priced monthly plans, and industry insiders predict a subsidy of around 150,000 won this time. The amount of subsidies is expected to be announced today. 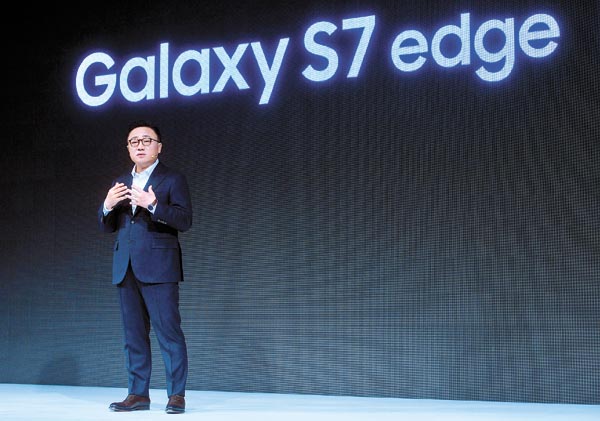 The reduced prices for the S7s reflect the challenges that Samsung faces against cheaper competitors - Chinese, in particular.

Koh Dong-jin, president of the mobile communications business at Samsung Electronics, said in a press conference on Thursday that he made the decision to drag down the prices after listening to the voices of the market.

“Although the company [Samsung] has to make the final decision, it’s the market and customers that determine the prices,” he said, refusing to give a clear-cut answer.

The press conference came almost three weeks after Samsung unveiled the new Android smartphones at the Unpacked event in Barcelona, Spain, on Feb. 21 on the sidelines of the 2016 Mobile World Congress.

Rumors have been circulating after mobile carriers began accepting preorders last Friday that the advance sales are 70 percent of the level for the S6 series, largely because the S7 and S7 Edge have no conspicuously innovative features.

But Koh insisted that he was “highly upbeat” about the preorder numbers. “I have traveled around key markets including Europe, the Middle East and China before and after the Unpacked event and seen the heavily buoyant reactions there.

“I am making a lot of efforts not to be overly excited,” he said. “Please wait just one day. You will see.”

Analysts have come up with a mixed outlook. Cho Sung-eun, an analyst at Samsung Securities, forecast the S7 will see its sales volume reduced by as much as 5 percent compared to S6’s 40 million, whereas Dongbu Securities and Eugene Investment and Securities suggested sales in the 40 million range.

“Boosting sales with only a few improved features will be limited,” said Park Jong-sun, an analyst at Dongbu.

Shares of Samsung Electronics advanced 2.6 percent to close at 1,225,000 won on Thursday.

The S7 and its S7 Edge cousin are equipped with more powerful cameras than their predecessors and have a water-resistance feature that was missing in the S6. The new phones can be submerged at depths of 1 meter (3.3 feet) for up to 30 minutes without damage.

The two phones feature the Galaxy series’ first-ever dual pixel rear-facing camera with 12 megapixel resolution to deliver brighter and sharper images in low light. It has been made possible by a brighter lens with wider aperture at F7.1, which promises a faster shutter speed and more accurate autofocus even in darker conditions.

The new phones are set to hit the market in 50 countries including Korea today.

In an apparent move to resuscitate its flagging performance in China, the world’s biggest smartphone market, Samsung unveiled the S7 to the media in Shanghai on Monday.

Samsung has been losing its leadership in China in recent years, being ousted from the top five spots last year in terms of market share to fall behind Xiaomi, Huawei, Apple and other local brands, according to market researcher Strategy Analytics.

Koh said he couldn’t guarantee the situation will change in the wake of the S7 release there.

The company revealed a “heart-shaped emoticon” as the main image for the S7 promotion. The heart symbol will replace the S in most commercials and promotions.