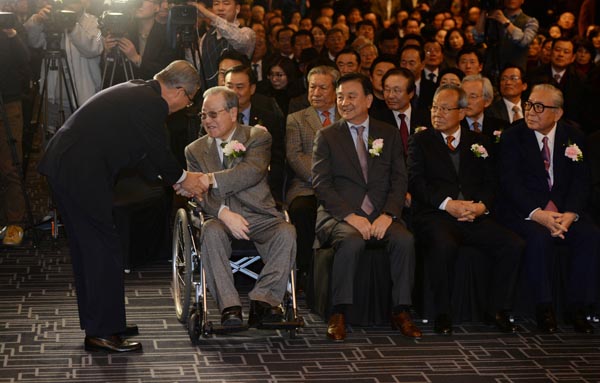 Kim Chong-in, the interim head of the main opposition Minjoo Party, left, bows to former two-time Prime Minister Kim Jong-pil at the book launch Thursday for the latter’s memoir. The event, hosted in Sejong Hall at the Sejong Center for the Performing Arts, was attended by top politicians, government officials, business people and media representatives. Hong Seok-hyun, chairman of the JoongAng Media Network, sits next to the former prime minister. The JoongAng Ilbo and the Korea JoongAng Daily printed a series on the life and times of the former two-time prime minister based on extensive interviews with him. The book was based on the series. [NEWSIS]