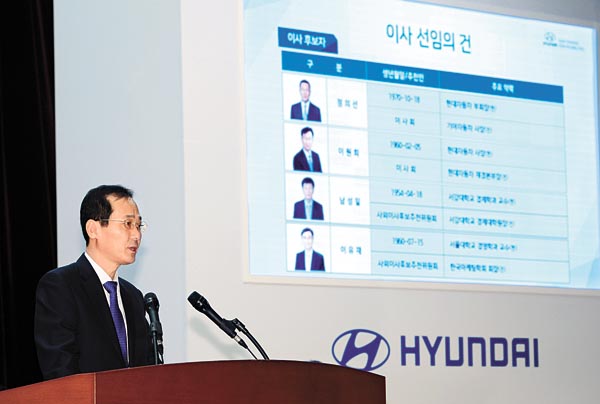 Dividend increases ranged from 33 percent to zero when some of the country’s biggest companies held this year’s first round of regular shareholders’ meetings on Friday.

Shareholders of 54 companies listed in the primary Kospi and tech-heavy Kosdaq bourses, including affiliates of Samsung, Hyundai Motor and Posco Groups, voted on approving the 2015 balance sheets as well as board members’ salaries, board appointments and dividends.

Samsung Electronics and other major Samsung affiliates changed their internal policies to allow independent board directors to be chairman, strengthening the voice of the board. Currently, only CEOs were eligible to be appointed as chairmen.

Samsung Electro-Mechanics appointed Han Min-koo, an Professor Emeritus of engineering at Seoul National University, as chairman of the board. It is the first time that an independent director has taken the chair of a Samsung affiliate.

In an effort to clarify shareholder-friendly policies, Hyundai Motor published a corporate governance structure charter at its meeting, which spells out the roles and rights of a shareholder, board member and an audit committee member.

The general meeting for Samsung Electronics went on for almost three-and-a-half hours as retail investors argued that some of the candidates do not qualify for the positions while receiving multi-billion-won salaries.

The company, which implemented an electronic voting system for absent shareholders, had to take votes four times. In Korea, it is rare for a large conglomerate’s shareholders meeting to last more than 30 minutes.

“I don’t think Lee In-ho, current board member and former CEO of Shinhan Financial Group, should be reappointed as the independent board member,” said a shareholder. “Lee has been on the board for the past six years, but he hasn’t done anything substantial for Samsung but simply raise his hands to approve the management’s business decisions when they ask.”

The reappointment of Song Kwang-soo, a current member and advisor to the Kim & Chang Law Office, was also questioned by shareholders because the law firm is known to be working with Samsung’s competitors Sony and LG Electronics.

The appointment of Bahk Jae-wan, a professor at Sungkyunkwan University and former Finance Minister, as an independent board member also faced objections as some investors felt it was inappropriate to consider Bahk due to his current teaching career at Sungkyunkwan, a college owned by Samsung.

The management, however, maintained its stance on appointments simply by pleading with shareholders to withdraw their opposition and approve their decision.

“We now understand all the oppositions going on,” said a board member. “But please withdraw the opposition. We’ll make sure to have the board member candidates accept your opinion and perform better this year.”

All three figures ended up being approved after receiving more than 25 percent of the votes. Song’s current advisory career at the law firm does not violate Samsung’s internal regulation, the company said.