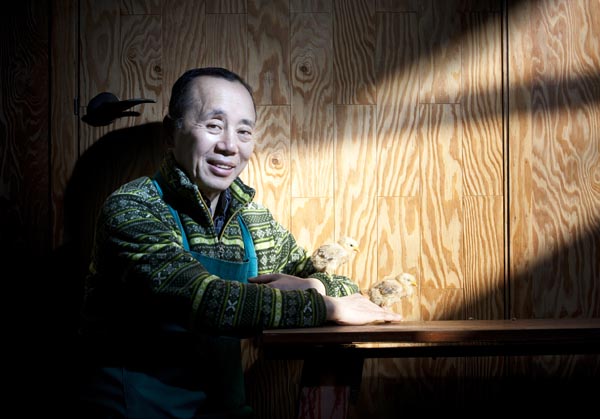 Hong Sung-jik, director of an orthopedics center, sits in his office with his chicks. Hong plans to raise them with local residents at the Ecological Community of Green Life Village, a communal poultry farm, on Jeju Island. [KWON HYUK-JAE]

In the corner of a staff room at the Hong Sung-jik Orthopedics Center sits a microwave-like device. It has been sitting there for a long time, though it serves no purpose in surgeries or X-ray scans.

“Goose eggs are inside that incubator,” said Hong Sung-jik, a 59-year-old doctor who directs the hospital at Yeonsam-ro on Jeju Island. “They’re for the town’s communal poultry farm.”

Hong calls himself a “farming doctor.” He runs a 33,000-square-meter (8.15-acre) poultry farm called the Ecological Community of Green Life Village about 20 minutes from his orthopedics center.

Apart from his work, he spends most of his time organizing Eco-Party, a gathering of preservationists, and supporting foreign workers and immigrants on Jeju as a co-representative of the Jeju Migrant Peace Community.

After obtaining his orthopedics degree, he served in the military as an Army surgeon and moved to Jeju Island in 1990.

“I moved away from Seoul to be near the mountains and the water,” Hong said. “After settling in Jeju, I searched for ways to give back to society as a doctor and began to participate in many activities.”

His childhood memories of growing up in the country led him to find a new home closer to nature. His father was the vice principal of Geochang High School in South Gyeongsang, and Hong said he long dreamed of becoming a doctor like Albert Schweitzer (1875-1965).

“Schweitzer was a doctor, but also a pastor and a musician,” he said. “When I was little, I dreamed of becoming someone like him.”

In the 1990s, Hong found 10 other doctors in Jeju who wanted to give back and started providing free medical checkups to foreign workers. Their initiative became what is now the Jeju Migrant Peace Community, which provides medical and residential support to more than 10,000 immigrants on the island.

Hong’s desire to pay it forward is inevitably tied to his profession as a doctor, and Eco-Party, which he organized three years ago, is a place for people to share healthy food and culture. The group hosts a farmers’ market, where local residents bring organic vegetables and produce they grew in their gardens; a pot-luck of dishes cooked with seasonal ingredients; and cultural exhibitions, including classical and traditional music concerts.

“What you eat, what you cook and how you cook it is 50 percent of your health,” Hong said. “The Eco-Party is held to help participants be more health-conscious. Of course, it’s important to enjoy culture together as well. The balance between the body and the mind leads to a truly healthy life.

“Achieving an ecological community that is self-sufficient in producing its own food is our goal,” he added.

It was only at the end of the interview that Hong revealed an incident that changed his thinking about his profession as a doctor.

Last year, he fell into a coma for 10 days after a traffic accident, and during one of his many medical checkups afterward, he was diagnosed with a gastrointestinal stromal tumor. The condition is rare, affecting only about 12,000 people worldwide.

“Among the patients I tend to, I’m the patient with the most serious condition,” he said, laughing. “I practice as a doctor who knows and understands the pain of my patients.”