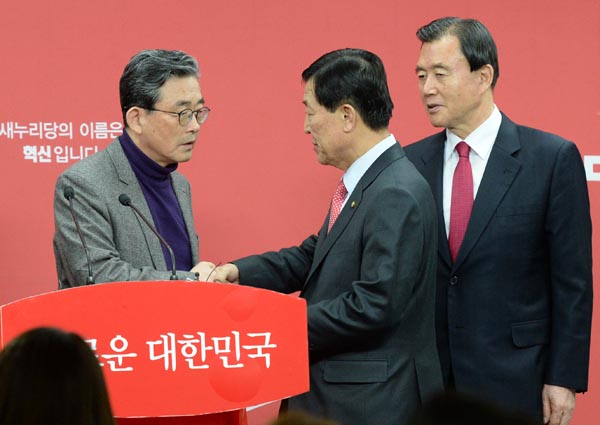 The ruling Saenuri Party faced a breakdown in its nomination process for next month’s general election, as senior leaders on the nomination committee questioned Friday the fairness of its procedures.

Hours later, the committee went back to its business, but skepticism over the integrity of the nomination process lingered.

Lawmakers outside the Saenuri faction loyal to President Park Geun-hye began questioning whether the nomination process was being influenced by the Blue House after a scandalous audio recording was leaked to the media earlier this week. The clip featured a telephone conversation between a key Park loyalist and an unidentified recipient.

For the conservative politicians who were not Park allies, the audio clip appeared to be a sure hint that the president may be wielding a strong influence over the nomination process for the April 13 general election.

On Tuesday, a local broadcaster unveiled a damning audio clip in which Rep. Yoon Sang-hyun, a loyalist and former political adviser to the president, was heard telling an unidentified person over the phone that Saenuri Chairman Kim Moo-sung should be “weeded out” of the nominations for April’s election.

Kim, who used to be a close associate of Park, is no longer considered a member of the pro-Park faction.

After the news went viral, Yoon claimed he had been “deeply angry” at the time he made the phone call on Feb. 27, because Kim had mentioned to local media earlier that day that there existed a “hit list” of 40 lawmakers the president allegedly wants to wipe out of the party.

It is unclear exactly who Yoon called; the second-term lawmaker claims he can’t remember because he was “too drunk.”

While pro-Park forces and the Blue House have remained largely silent, claiming that the recording infringed upon Yoon’s privacy, Saenuri members against the president have expressed frustration over the possibility that Park’s close aides may be attempting to intervene in the forthcoming elections.

Channel A, the broadcaster that aired Yoon’s audio clip, reported Wednesday that Lee Han-koo, the head of the Saenuri nomination committee, had secretly met with Hyun Ki-hwan, a senior political secretary to the president, which has led to doubts about the president’s political neutrality.

Hyun has denied meeting with Lee, and Blue House spokesman Jung Youn-kuk said Friday that no such meeting took place.

On Thursday evening, Hong Moon-pyo and Hwang Jin-ha, secretary generals in the Saenuri Party and members of the nomination committee, held a press conference at the National Assembly to announce that they would be boycotting all meetings concerning the nomination process, citing Lee’s “dogmatic style” of decision-making.

Lee was quick to add that he would not announce any party nominations until Hong and Hwang returned to the discussion table, yet unveiled a list nevertheless at noon on Friday. The secretary generals said they were unaware of the announcement.

On Friday evening, the three held another press conference to announce that they had mended the rift and would “work harder to communicate.”

Details of the truce were unclear.