Where hackers learn to be ‘white’

Where hackers learn to be ‘white’ 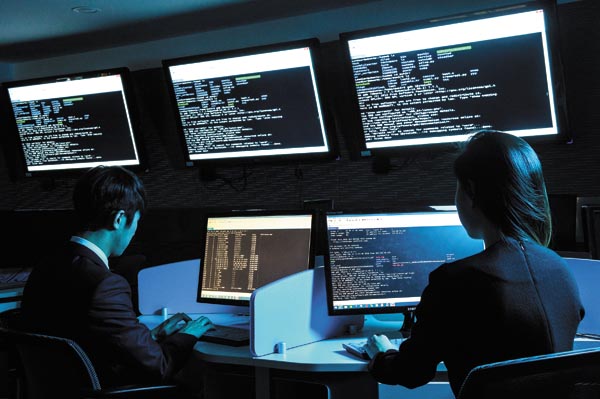 Students in Korea University’s cyberdefense department engage in a mock hacking war in the so-called War Room. The students are divided into hackers and defenders to gain practical experience in cyberwarfare and defense. All information on the students is confidential. [OH SANG-MIN]

A warning notice was handed out to parents and other well-wishers in the auditorium: “The information on the graduates,” it read, “is strictly confidential.”

The 28 were the first graduates of the cyberdefense department at Korea University, which was started by the university and Ministry of National Defense in 2011 to raise a cadre of professionals to fight cyber-terror threats from North Korea and elsewhere.

All students were required to pass medical and security background checks. Three of the 28 are women.

The graduation was closed to the public to protect the identities of the graduates. Details about the curriculum are strictly classified. The courses don’t have names like Cybersecurity 101. In fact, they are referred to by cryptic numbers such as “17” or “28.”

“Even when we win awards in competitions, our names are only partially revealed on the celebration banners hung at the school gate,” one of the students said.

“We are keeping the identities of the students confidential in order to protect them from being targets of North Korea’s terror threats or cyberattacks when they become officials who have access to top-secret intelligence,” a department official said.

Korea University’s cyberdefense department was set up after the massive cyberattack on Nonghyup Bank. South Korean prosecutors said the attack was traced back to North Korea.

“This is the first university program in the world to train professionals to counter cyberattacks,” said Lim Jong-in, a cyberdefense professor at Korea University who helped set up the department. “After the attack on Nonghyup, which paralyzed the bank’s networks, cyberattacks became more of a national security issue. That’s when we founded the cyberdefense department here at Korea University.”

Graduates will receive seven weeks of military training starting next month and be commissioned as second lieutenants in the Army in July. They will serve seven years as commissioned officers, the longest mandatory military obligation period existing in Korea.

Each student received a full scholarship for four years in the program, paid for by the Defense Ministry, and a 500,000 won ($410) monthly stipend paid for by the university. Professors are former and current codebreakers, hackers and army generals.

The graduates will also serve as research professionals at the Agency for Defense Development to develop cyberweapons to incapacitate North Korea’s cyber networks in times of emergency.

The curriculum focuses on practical experiences for the students, such as exercises in the department’s War Room, which is packed with dozens of computers and a large monitor on one of its walls.

“During class, the students are split into attacking and defending groups; one side hacks while the other defends,” said Hong Seok-hee, dean of the cyberdefense department. “The rest of the class watches and assesses the movements.

“The War Room cost the school a total of 1 billion won, including 600 million won to establish a database,” Hong said.

He added that software used by North Korea is brought into the classes to train the students.

The graduates are informally known as the “white hackers,” a term derived from white knights. They are hackers who defend computer networks from harmful cyberattacks.

One of the graduates, a 23-year-old surnamed Kim, and his student-organized club CYKOR won last year the DEFCON 23 CTF competition, known as the World Cup of hacking. It was the first time South Korea won the competition.

“I didn’t know anything about hacking before enrolling in the cyberdefense department,” Kim said. “I honed my skills through mock hacking wars.”

Aside from hacking, the department teaches cryptology and military science. Some of the graduates will become codebreakers or cyberpolicy experts.

“I decided to enroll after finding out that the program turns out not just hackers but professionals who are able to engage in psychological warfare,” said another 23-year-old graduate surnamed Lee. “I hope to become an expert in cyber-related laws and policies.”

In order to graduate, students in the cyberdefense department at Korea University need 108 credits, twice the number of credits needed to receive a degree in engineering colleges.

“To make sure that I earned a sufficient number of academic credits, I sit through seven to eight hours of classes a day,” one student said.

North Korea has its own hacker-training schools. Established in 2009, its Cyber Warfare Guidance Bureau within the Electronic Reconnaissance Bureau is suspected to be training 6,000 cyberwarfare professionals at any given time, including 1,200 hackers. Math prodigies are identified at the age of 10 and trained in computer technology before being sent to Kim Il Sung Military University.

But South Korea has only 1,000 professionals trained for the national cyber-terror response system.

“Cyberwarfare involves programming skills and creativity on the part of the hackers,” said Han Hee, a professor at the Seoul Media Institute of Technology. “South Korea needs a structured training system to foster cyberwarfare officers.”