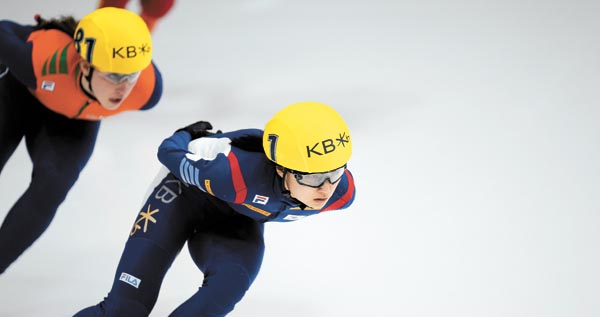 Choi Min-jeong of South Korea finished first yesterday in the women’s 1,000-meter event on the third day of the ISU World Short Track Speed Skating Championships in Seoul at the Mokdong Ice Rink. Choi clocked in at 1 minute 31.933 seconds to clinch gold. Elise Christie of Great Britain won silver with a time of 1 minute 31.980 seconds. Choi also placed second in the 1,500-meter event on Saturday with a time of 2 minutes 37.073 seconds. Owing to her performance over the weekend, Choi tallied 66 points total to finish in first overall in the championships among women. Meanwhile, Park Se-yeong nabbed bronze in the men’s 1,500-meter event on Saturday and silver in the 3,000-meter Super Final yesterday to finish fourth overall among men. Finally, the defending champion South Korean ladies relay team placed first in the 3,000-meter relay to win the title for the second consecutive year. [NEWSIS]