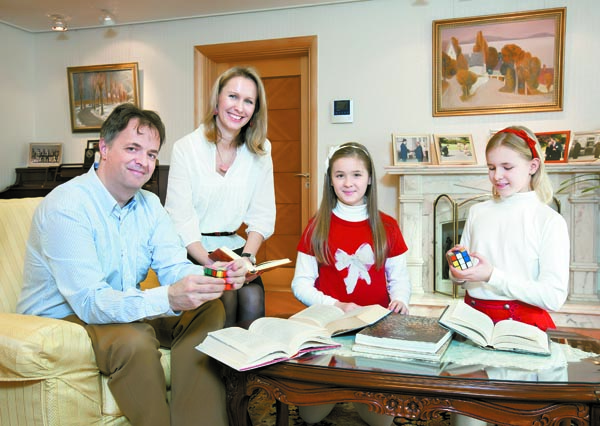 Hungarian Ambassador Gabor Csaba, far left, says he and his family enjoy reading by the fireplace at their residence in Yongsan District, central Seoul. From second left are his wife Edit and daughters Greta and Flora. [PARK SANG-MOON]

After moving out of their house in a quiet green suburb just outside Budapest, Hungarian Ambassador Gabor Csaba and his wife Edit Csaba could hardly imagine a new life in one of the busiest cities in Korea - and in their first Asian country, no less.

In Seoul, one could barely spot a speck of nature, and life seemed much faster.

But after living here for over two years, Edit Csaba now prides herself in discovering her own way of getting back in touch with suburban life in her home country.

“I got up early today just to buy some flowers at a nearby shop for the house tour,” she said while guiding a Korea JoongAng Daily reporter around her residence.

“It’s one of my favorite hobbies,” Csaba said. 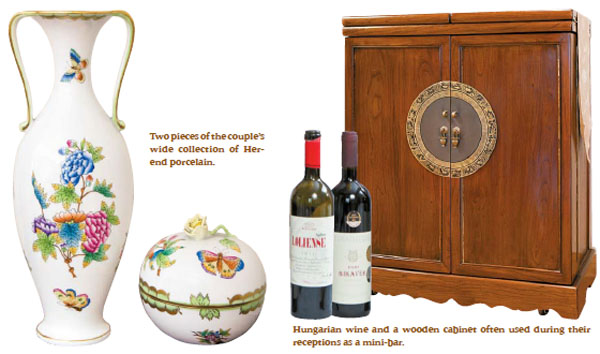 A. The Hungarian government has rented our residence in Seoul for well over 10 years. The house has been furnished by our Foreign Affairs Ministry to make it look and feel like a modern European residence.

Our family is the fourth to occupy it. We have lived in it for two and a half years. We are happy to be living pretty much in the center of the city [in Yongsan District] and therefore have excellent access to a lot of exciting places inside Seoul.

The home is divided into our living quarters - where our family of four spends most of our time - and the rooms we use for our functions.

For the reception hall, the wallpaper and curtains are practically the only aspects I changed because I thought the new designs and colors would blend well with the overall atmosphere.

What is the largest event or reception you regularly hold in your residence?

To name one, we annually host winners of the prestigious Korean Liszt Competition, organized by the Korean Liszt Society and sponsored by the Hungarian Embassy in Seoul. The piano competition is chiefly for young piano artists in Korea but also invites foreigners to play some of the legend’s greatest pieces.

We also use our residence, among other things, for business meetings, consultations, small concerts and award ceremonies for the local Korean and Hungarian communities.

[Franz Liszt (1811-86) is remembered today as one of Hungary’s greatest composers and pianists. He was a strong influence during the Romanticism period, pioneering the musical technique of thematic transformation.] 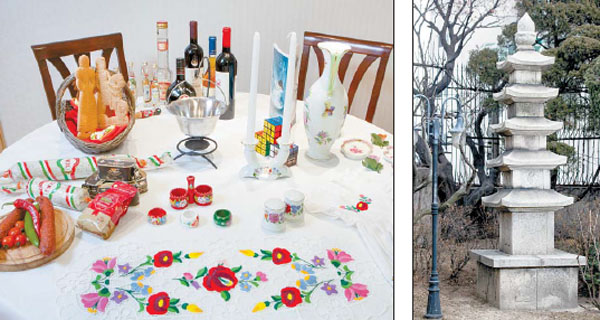 We have local staff assisting us in preparing our events, which means that we have worked with them extensively to ensure that the dishes served at our functions are genuinely Hungarian, reflecting the best qualities of our gastronomy.

As some readers may know, Hungary is not only famous for its many inventions, 13 Nobel laureates, an exceptionally great number of sports achievements and musical geniuses including Franz Liszt and Bela Bartok, but we also take pride in our goulash, chicken paprika and Gundel pancake.

To this end, I always spend a lot of time in the kitchen before our dinners and receptions to make sure that at the end, we do not disappoint anyone. The responsibility is great because there are no places outside our residence where authentic Hungarian food is served, with the exception of a confectionery named Gerbeaud, which was initially established in Budapest in 1858 and arrived in Seoul in October 2014. Now everyone can taste its fantastic cakes at the Lotte World Mall in Jamsil-dong, southern Seoul.

We feel a lot of fondness for our wine cellar, as it stores many bottles of the internationally acclaimed Tokaji aszu (a naturally grown sweet dessert wine), a number of fiery reds including the very popular Bull’s Blood (Egri Bikaver) and the unique white wines made out of a variety of grapes such as furmint, harslevelu and juhfark.

Our collection also includes a wide selection of Hungarian palinka, the strong fruit brandy which could be compared to Korea’s soju. Our guests never leave the residence in a bad mood after tasting a few of these fine drinks.

Do you have a favorite object?

There is a wooden cabinet holding bottles of the liquor we serve at our functions. It was here before we moved in, so I don’t know precisely how it ended up in our house, but it seems to feature great Korean craftsmanship, is sturdy and blends very well with the character of our living rooms.

It goes without saying that we are also proud of the high-end collection of Herend porcelain, which is sought after by so many devoted collectors around the world. Since the manufacturer was founded in 1826, it has grown into one of the world’s most prestigious ceramic factories, specializing in luxury hand-painted and gilded porcelain. Local fans can get them at department stores.

What does a typical house in your homeland look like, and how does it compare with Korean houses?

There is a big variety of houses in Hungary, and visitors can detect various remainders of the past. Alongside the modern houses, you are likely to come across beautifully restored old mansions and old peasant houses with their signature thatched roofs.

There is also the Hungarian heating instrument, the so-called tile stove. It is not only an efficient and cozy means of heating but also serves as a beautiful piece of furniture and therefore has enjoyed a renaissance in Hungary.

We especially love our Korean garden and the statues that can be found in it. The garden design, from our point of view, is rather Asian-looking, with a lot of evergreens and azaleas.

The owner of the residence, a Korean gentleman, is very proud of his garden, and he maintains it with so much passion. A stone pagoda statue stands at one end of the garden and has a dominating presence.

How are you adjusting to life here?

We arrived in Seoul right before Chuseok [Korean Thanksgiving] in September 2013, and from our first day here, we have loved the experience.

Our favorite locations outside Seoul are the Seoraksan National Park, the Yongpyong Ski Resort in Gangwon, Songdo International Business District in Incheon and Gyeongju in North Gyeongsang.