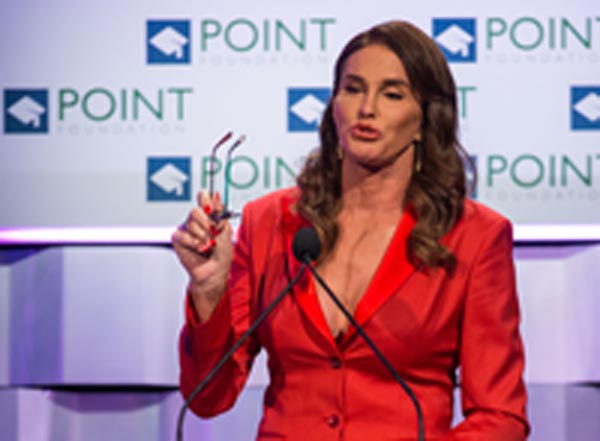 Caitlyn Jenner speaks during the Voices on Point Gala in Los Angeles in October. [AP/NEWSIS]

NEW YORK - Since coming out a year ago, Caitlyn Jenner has not always been a unifying force in the transgender community. Her latest political remarks, underscoring her conservative outlook and praising Republican presidential candidate Ted Cruz, ignited criticism from supporters of transgender rights, who view most conservative Republicans as adversaries.

Tennis great Martina Navratilova and country singer Chely Wright were among the many people denouncing Jenner.

Yet a more nuanced conversation followed, questioning whether transgender Americans must be monolithic in broadly supporting progressive politics, or whether they can have differing views.

Mara Keisling, executive director of the National Center for Transgender Equality, said she is grateful there are transgender Republicans and would like to see the issue of transgender rights addressed on a nonpartisan basis. She also said it is inevitable that the ranks of transgender Americans would grow more diverse.

“Trans people need to buckle up,” she said. “With all the folks who will be coming out in the next few years, you’re not going to agree with all of them.”

While Democratic candidates Hillary Clinton and Bernie Sanders have voiced strong support for LGBT rights, Cruz and the other Republican contenders have expressed misgivings about same-sex marriage and supported protections for people who oppose it on religious grounds.

Among those wrestling with the fallout of Jenner’s remarks is Jennifer Finney Boylan, a consultant and cast member on Jenner’s reality show, “I am Cait.”

“In terms of equality and dignity, the difference between Republicans and Democrats is night and day,” Boylan said in an interview. “I don’t really get why you’d vote against your own civil rights.”

Yet Boylan remains engaged in the TV series and considers Jenner a friend.

Jenner sparked the furor with comments in a March 2 article in The Advocate, an LGBT-oriented magazine.

“I like Ted Cruz,” Jenner declared, even while describing the Texas senator as “one of the worst ones” in regard to transgender rights.

“The Democrats are better when it comes to these types of social issues. I understand that,” Jenner told The Advocate. “So why support Republicans? Number 1, if we don’t have a country, we don’t have trans issues. We need jobs. We need a vibrant economy.”

Jenner suggested lightheartedly that if Cruz is elected president, she could become his “trans ambassador” and seek to sway him on transgender issues.

According to the Gay and Lesbian Victory Fund, which supports LGBT political candidates, there are no transgender Republicans currently serving in elective office in the U.S.