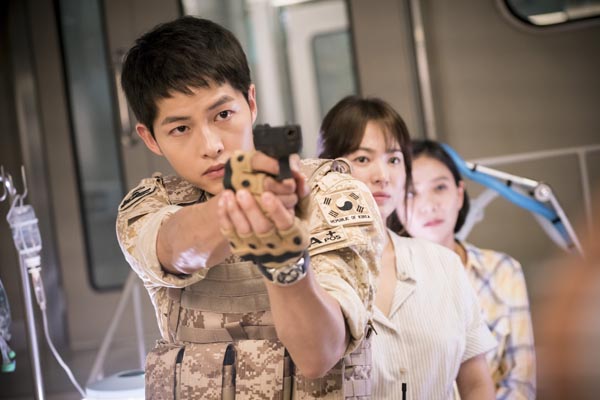 Today’s hottest drama, “Descendants of the Sun,” is revitalizing the Korean Wave.

The drama has reportedly been sold for about $100,000 per episode to a distributor in Japan. With 16 episodes in total, that adds up to be roughly $1.6 million.

Considering the recent decline in popularity of Korean dramas abroad, with prices per episode at well below $100,000 in the past three years, the latest development is seen as quite a turnaround.

Since “Winter Sonata” (2002) found success in the Japanese market, it has been the main drama market that Korean producers vie for. This competition for the Japanese market led to a big increase in the quality of Korean dramas and in international competitiveness.

The price per episode topped at about $300,000 per episode with “Love Rain” (2012). However, since that drama failed to impress, the Korean Wave started to subside.

But thanks to its success in China, “Descendants of the Sun” is in demand in Japan.

Although there is still a long way to go to return to $200,000 per episode, many drama producers see the latest deal as a sign of the Korean Wave’s resurgence in Japan.