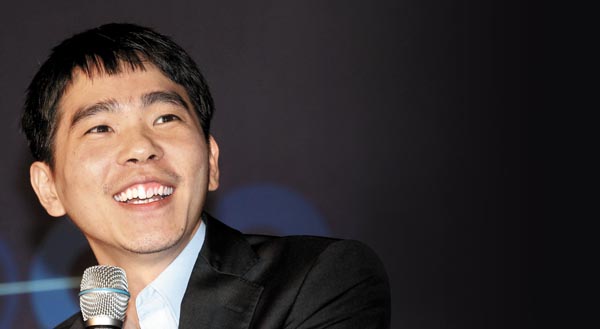 The 33-year-old lost the previous three games to AlphaGo, making the AI program the ultimate winner of the symbolic tournament between man and machine. A 9-dan professional player, Lee appeared determined to redeem himself in the fourth match.

The self-evolving artificial intelligence program that played with black stones in the fourth game sent a pop-up message on its computer screen that read, “AlphaGo resigns,” at 5:44 p.m., with only a minute left in the match.

“It is an invaluable victory that cannot be replaced with anything,” Lee said Sunday at a press conference after the fourth game, which was held at the Four Seasons Hotel Seoul. “It is the first time that I get to be congratulated for just one win. I am so glad with this one win after losing three times.”

Lee has won 18 world championships in Go. He debuted as a professional player at age 12 in 1995 and clinched his first international title, the 15th Fujitsu Cup International Go Championship, in 2002.

AlphaGo was ahead of Lee in the beginning of the game, which kicked off at 1 p.m., leading onlookers to predict another win for the program until the 85th move. But the mood changed after move 87.

“Lee Se-dol is playing brilliantly!” wrote Demis Hassabis, the founder and CEO of Google DeepMind and the developer of AlphaGo, on his Twitter account while watching the game at 4:38 p.m. “AlphaGo thought it was doing well, but got confused on move 87. We are in trouble now...”

As the match headed toward the finish, AlphaGo made an apparent mistake on its 161st move, according to commentators, which increased Lee’s chance of winning at around 5:30 p.m.

“Lee is an incredible player and he was strong for AlphaGo today,” Hassabis said at the press conference after the game. “AlphaGo started off well, and it was estimated it was doing very well in the middle position, but then because of Lee Se-dol’s fantastic play, it was pressured into some mistakes.”

“But actually, we are also happy, because this is why we came here, to test AlphaGo to its limits and find out what its weaknesses are and try to improve the program,” he added.

“I found two weaknesses of AlphaGo,” Lee said. “It finds the black stones more challenging than the white stones. So, I want to beat it with black stones.” Lee requested to play with black for the final match tomorrow.

“Lee was able to play his own game today,” said professional Go player Song Tae-kwon. “Sine he has learned of AlphaGo’s subtle weaknesses, the final game will be even more exciting.”

In the third game on Saturday, although the Go master made aggressive moves in the beginning, he was defeated after 176 moves.

The overwhelming victory of the self-evolving computer system shocked the Go community across the world, and he was not expected to win in the fourth game.

“The fact is Lee Se-dol lost, not the human,” Lee said after the third match. “It is a very surprising program but it is not yet as perfect as God.”

The final game of the Google DeepMind Challenge Match will begin tomorrow at 1:00 p.m.