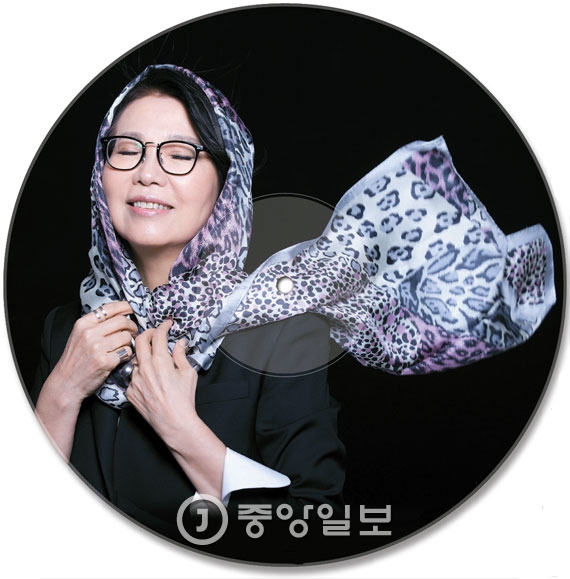 After 37 years away, Jeong Mi-jo is returning to the Korean music scene with a new album, aptly titled “37 years.”

The 67-year-old singer left for Paris in 1979 at the peak of her singing career to study painting. “Singing was my sweet little deviation,” Jeong said, explaining that she, at the end of the day, is a painter.

But during her absence, many of her songs were revisited, cherished, remade and sung by her successors. As the line, “Though I go away, I won’t be gone completely,” from her famous song “Gaeyeowool” suggests, she was always around.

Back in the Korean music scene where much has changed, Jeong is hoping to restart her music career, and of the 13 tracks on her new album, 11 songs are brand new.

In addition, the legendary singer is planning her first-ever solo concert for April 10 at LG Arts Center in Seoul.

Q. When you left, it did not seem as though you would be back. What made you return to singing?

A. I ceased my 23-year career as an art professor at the University of Suwon. Choi Baek-ho, also an old singer, suggested that I make a comeback. I feel like I am at the starting line once again. I was worried if I would embarrass myself, but I did it anyway.

Would you explain what it’s like being so many things - a singer, painter and educator?

I never meant to be so many things. I was immersed in painting alone in Paris for 13 years. That was a very lonesome period for me. I never started painting to be a professor; it just was my dream to be the painter. My life revolved around painting. Singing was my sweet little deviation.

And now another deviation. What do you make of it?

I could have certainly just lived happily ever after out of the spotlight now that I’m retired. All my family and peers suggested I do so. But I just couldn’t look the other way when the opportunity came in such a miraculous fashion, at least that’s how I view it. I am just plain happy. With my students calling me awesome, I feel like I’m literally in a dream (laughs).

How did you prepare?

Off the stage for 37 years, I got rusty. Imagine fixing up a car that’s been sitting in the garage for awhile. Plus I got a lot of mileage on my body compared to 44 years ago. But diligent preparation and my whole life experience was enough to make up for all that.

Father Time is working in your favor?

Young cooks brandish their knives fiercely, whereas their elders just stick to their rhythm with poise, believing in their craft. Singing is no different. With no such confidence, the elders would just stay in the shadows.

How long will you be able to sustain yourself in the spotlight?

Once it either becomes too much for me or my songs don’t sound right, I’ll stop right there. I believe that is courteous to the fans. Eight years ago when Nana Mouskouri, of whom I used to be a big fan, visited Korea, I was extremely disappointed to see a mere shell of Mouskouri. I would not do that to the fans.

How would you compare songs and paintings?

They are the same, in a sense that both are means of self-expression. But through singing you get to meet the receiver of the communication first-hand, with painting it takes time to see what people make of it. Fundamentally, I consider the two to be the same.

What does singing mean to you?

Whether it be song or painting, they both come to be after due diligence. Nothing in life, bar none, is given easily. Endless repetition is the only solution in artistry as well.

“Camel” is one of the tracks included in the new album. Camels endure thirst and the weight of heavy loads on their back but stride one step at a time to cross the desert. I got through everything with such a mentality. I just hope the songs can be encouraging to those in need.”