If you think Korea’s talent agencies are just management companies that handle signed artists’ schedules and hold auditions, you might have to think again. 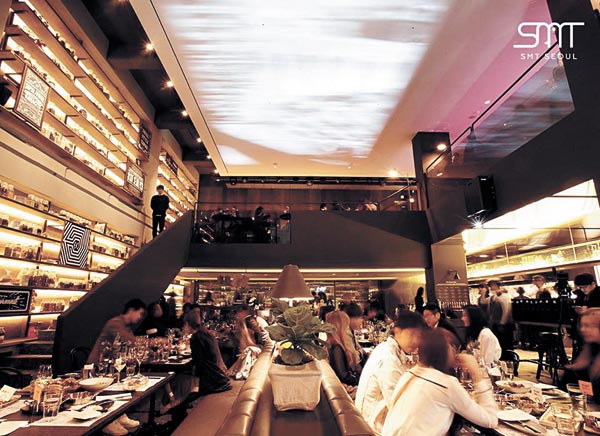 At least if you are a K-pop fan.

Korea’s three major entertainment companies, the main ones in turning the local music industry into a worldwide K-pop phenomenon, are aggressively expanding their businesses into other cultural sectors.

From opening posh restaurants and cafes to launching a cosmetics brand and even developing a social networking app, these entertainment giants’ influence now goes far beyond just creating girl and boy groups.

At a glance, the newly entered fields seem to have no relation to their main business.

However, by tying in the resources they have - namely the popular K-pop stars who have huge followings across Asia and even in Western countries - to the new business areas, these entertainment gurus are readily entering the competitive industries of restaurants, fashion and mobile apps.

SM Entertainment, the country’s biggest entertainment company by market capitalization and home to some of the country’s most well-known K-pop acts, such as Girls’ Generation, Super Junior and Exo, has broken ground once again by entering the restaurant business, opening a trendy multipurpose restaurant in the affluent neighborhood of Cheongdam-dong in southern Seoul in January.

Located just 10 minutes on foot from the company’s main headquarters, this five-story building called SMT Seoul serves what are called Seoul-style tapas, comprising small dishes based on the cuisines of not only Korea but also those of Japan, China and more.

On the top two floors, which are available only by reservation, people can hold parties and private meetings as well.

SM Entertainment’s advancement into the restaurant business goes as far back as eight years, when it established the subsidiary SM F&B in 2008 to open Korean food and chicken restaurants. Subsequently, however, both restaurants closed down after failing to generate profits.

SMT Seoul is, therefore, the result of the company’s meticulous research to find out how to survive in the market.

“The restaurant’s concept is the result of our five-year research, and we came up with serving fusion dishes in order to cater to foreign visitors who come here out of their admiration for the singers signed to our company,” said Alas Kim, head of SM Entertainment’s investor relations. “We try to relate the management of our restaurant to the content we already possess because that is what we are good at.”

As Kim notes, a lot of visitors to SMT Seoul are those who come from abroad in hopes of catching a glimpse of their favorite stars. Although it is unlikely they will have a chance to witness actual singers at the restaurant, the thought of eating at the same place is more than enough to excite these fans.

“K-pop fans want to share what their stars have done from top to bottom,” Kim said.

Upon entering, holograms of the agency’s most well-known stars appear on one side, while their music videos are screened across the ceiling. With the decor stopping just short of tackiness, it is easy to see that this place is the pinnacle of a subtle yet sophisticated experience.

Using images of big K-pop stars to lure fans to new businesses is a common strategy for many talent agencies.

YG Entertainment, known for representing global star Psy as well as Big Bang and 2NE1, has been pursuing this strategy since last year.

Outfitted with a retro interior in which one wall is covered with graffiti related to YG’s hip-hop acts, the eatery has been especially popular among foreign K-pop fans, according to YG officials.

“Although we don’t keep statistics on how many K-pop fans come here, we acknowledge their presence when we roll out online events for which a lot of the prizewinners turn out to be foreigners,” said an official from YG Plus, which oversees the agency’s food business.

“At the restaurant as well, we organize diverse events where we give out tickets to signed singers’ concerts or merchandise products related to the idols,” she said, adding that social media marketing showing Big Bang or 2NE1 enjoying concert after-parties at the restaurant have helped raise awareness of the place among foreigners.

Riding on the positive outlook of Samgeori Butchers, YG is planning to launch a global restaurant project called YG Republique, of which the first establishment had a preliminary opening in Myeong-dong, central Seoul. Although not much information has been unveiled, the place is likened to a food court housing multiple brands of dining and drinking.

Once its domestic business is established, YG Republique is planning to go overseas, opening branches in Thailand and the United States.

JYP Entertainment, the last of the country’s top three entertainment agencies, and the company that has taken the fewest steps toward diversifying its business, also runs a brunch cafe called The Street in Cheongdam-dong, not far from its headquarters.

Although the food and beverage market is one of the most competitive sectors because of its relatively low barriers to entry, it is not the only field the entertainment giants are getting into.

According to the retailer, the consumer transactions, which indicate the average purchasing amount per customer, is more than three times higher than that of other convenience stores run by the conglomerate.

YG Entertainment, on the other hand, is leaning more toward marketing K-beauty, which has emerged as one of the key components of Hallyu, or the Korean Wave.

Launching its own cosmetics brand, Moonshot, and fashion label, Nonagon, YG is continuously finding new businesses through which to spread its artists’ image.

In the case of Moonshot, which launched in 2014, there is a three-story flagship store in Samcheong-dong, a hot spot for foreign tourists, and has advanced into other Asian markets such as Malaysia and Singapore through the global beauty retailer Sephora. In order to appeal more to foreign consumers, the brand selected its own singers - Sandara from 2NE1 and G-Dragon from Big Bang - as its main models.

However, while coming up with new business ventures utilizing K-pop is the inevitable result of entertainment agencies’ pursuit of profit beyond solely relying on the music business, there are concerns about the speed at which they are expanding.

“The entertainment agencies are indiscriminately expanding their business using the fandom and resources they have as K-pop gurus,” one retail industry insider said. “But jumping into a business without careful deliberation and research into the market, it is very easy to stumble.”

“Having popular K-pop stars at the forefront to sell their items might be effective at first, but it eventually comes down to the quality and content when having cultural competitiveness,” he said.