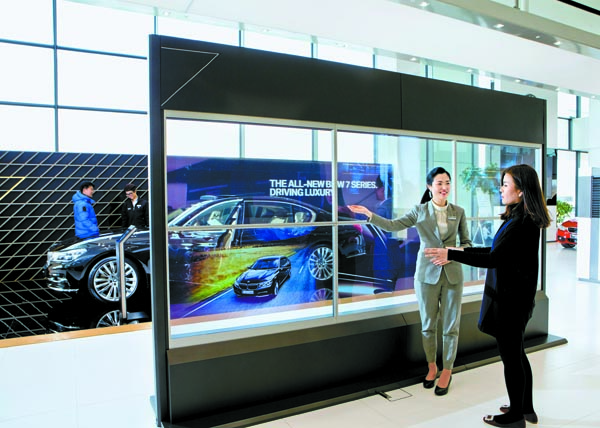 BMW Korea gives a presentation with a Samsung Electronics OLED display at its driving center in Incheon on Jan. 26. The video wall resembling glass is as large as an actual car. [LIM HYUN-DONG]

Large-screen televisions are a worry whenever people move to a new residence. They’re so easy to damage.

But that may not be a worry in the near future.

LG Display unveiled an 18-inch organic light-emitting diode (OLED) display that can be rolled up like a scroll at the Consumer Electronics Show (CES) held in Las Vegas earlier this year. When it’s rolled up, its radius can be as small as 3 centimeters (1.18 inches).

“We plan to develop a 60-inch rollable display by next year,” said Kim Kwang-jin, an executive director at LG Display.

It is also highly possible that a smartphone that can be folded like a wallet might be developed soon. Samsung Display developed a foldable display for the first time in the world in November 2014, and Samsung Electronics is currently trying to build a smartphone using the technology.

Displays are not only being folded and rolled. They’re also becoming smarter. 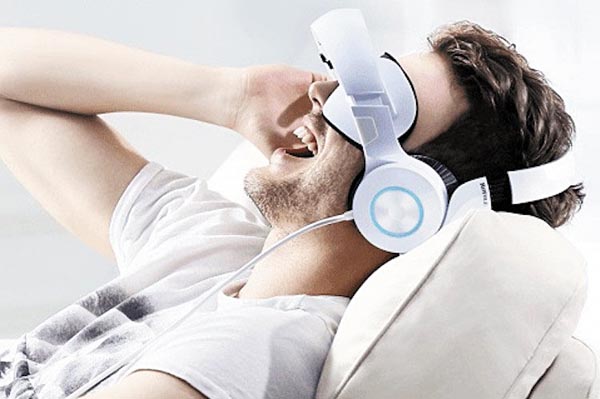 At this year’s CES, local companies Green Optics and Systran International presented spectacles they co-produced. The spectacles offer simultaneous interpretation. The wearer sees a virtual screen that appears to be 50 inches with translated captions of what people are saying in real time.

“When a display meets software, its use will be wider,” said a spokesman for Systran International, a global leader in machine translation.

The display market is growing rapidly, especially as new technologies are paired with screens. Displays are used in smart cars, smart fashion and even in refrigerators and windows.

Every wall and empty space might be filled with displays in the near future as augmented reality and virtual reality technology develops.

The world is literally becoming a “display everywhere” place. 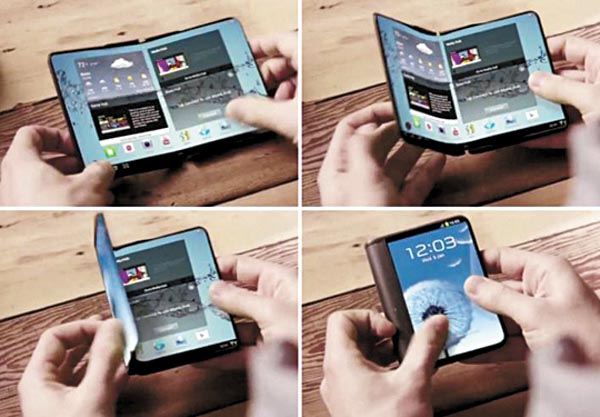 Samsung Electronics is currently developing smartphones that can be folded like a wallet. [SAMSUNG ELECTRONICS]

“Display shapes have always been rectangular, but they are now becoming more diverse, and this change allows the display industry to expand,” said Lee Woo-keun, a senior researcher at LG Economic Research Institute.

OLED displays are playing an important role. The self-lighting pixel technology in OLEDs does not need color filters or the kind of luminous source required for liquid crystal displays (LCD). Industry insiders agree that OLEDs will replace LCDs, since they can be made thinner and lighter.

It is expected that the market for OLEDs will grow 12.9 percent annually by 2020, while the entire display market size will grow 1.2 percent per year during the same period.

Samsung and LG, leaders in the overall display industry, also have the lead in OLEDs. These two companies accounted for 98.5 percent of the OLED market last year.

But they may lose that commanding lead. China will be able to close the technology gap by 2017, according to the Bank of Korea (BOK).

“We need to make a market environment in which people have no other option but to use locally produced flexible displays,” said Kwon Oh-kyung, a professor at Hanyang University. “Display companies should find ways to create new products using their materials rather than just focusing on supplying products to other manufacturers.”

Chinese display manufacturer Royole surprised the crowd at CES this year by unveiling its Royole-X Smart Mobile Theater system. Unlike other virtual reality products that use smartphone displays, its headset uses its own display, sound system and operating system. Users can enjoy watching movies at home but feel like they’re in a movie theater. The product is being sold for $699 at Royole’s online shop.

When one digs deeper into this particular company, you can see the progress being made by China is in the display industry. Royole, a start-up established in 2012, unveiled a 0.01-millimeter-thin flexible AMOLED (active-matrix organic light-emitting diode) prototype for the first time in the world in 2014. 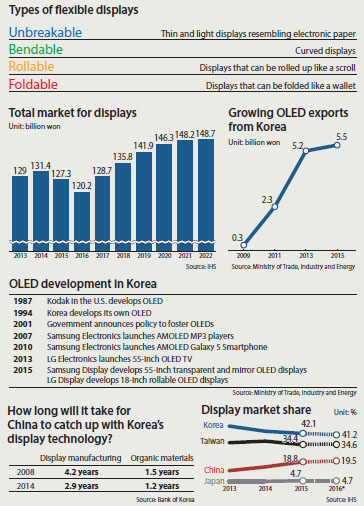 The technology used in Royole-X is remarkable as well. It has 3,300 pixels per inch, the highest among commercialized displays.

Korea has been working on technologies for more than 20 years to lead the display industry. This one Chinese start-up only took three to four years to catch up.

Royole CEO Bill Liu graduated from Stanford University and established the company in Silicon Valley. Royole is not as interested in mass-producing display products like other display manufacturers such as Samsung and LG. The Chinese manufacturer creates products that use materials and software it developed, including displays and operating systems. In other words, Royole tries to make products that it is interested in making and has a unique advantage in.

“China is catching up faster than we expected,” said Lee from LG. “We need to focus on creativeness or designs rather than just working on mass-producing.”

The technology gap in displays between Korea and China has been narrowed from 4.2 years in 2008 to 2.9 years in 2014, according to the BOK. The BOK expects the gap will disappear by next year.

China, which controls 25 percent of the global TV market, has been working hard to strengthen its display technology with the support of the government. Chinese display manufacturer BOE is currently building a 10.5-generation LCD production line in Hefei, China. The company plans to spend 7.34 trillion won ($6.17 billion) and make 90,000 units of 65-inch displays for TVs every month by mid-2018.

It’s expected that BOE’s productivity will grow rapidly. Many experts believe BOE’s new generation factory will outpace Korea’s in the near future.

Another Chinese manufacturer, CSOT, has plans to build an 11-generation LCD production facility as well. When supply rises with all the made-in-China products, Korean companies’ profitability will inevitably fall.

WitsView, a market research firm, said China will produce more displays than Korea does by 2018.

The OLED sector is similar to LCDs. Samsung and LG started investing and planning for the sector in the late 1990s. The government decided on certain policies to foster their development in 2001.

But many foreign companies are interested in this area.

Sony, Toshiba and Hitachi jointly established Japan Display in 2012 through the Innovation Network Corporation of Japan (INCJ), a partnership between the Japanese government and 19 major corporations.

Apple, which has only used LCDs for its smartphones, now plans to use OLEDs, and Samsung and LG will compete with the Japanese firm to get a contract from Apple.

Many expect an iPhone 7 or iPhone 8 with an OLED display to make a huge impact on the display market. Apple sells nearly 200 million iPhones every year.

“It is not about the size or price of the displays anymore,” Professor Kwon said. “Korean companies need to think ahead to what the display market will be like in the future.”

3-D printers, the Internet of Things and cloud services are expanding rapidly, and many experts believe display manufacturers have to learn something from them in order to survive.

“We have passed the time when customers bought products just because they were fun or unique,” said Yoo Hee-soo, a researcher at the Korea Institute of S&T Evaluation and Planning (Kistep). “Display manufacturers have to think about what customers are really looking for, and these companies can benefit from working with start-ups or investing more on researching the user interface and user experience.”

In other words, companies will have to find new markets and products that will require displays in order to stay competitive.

Displays are now being used in almost every industry, such as automobile, education, health care and media.

“Rolls-Royce makes more money from providing after-sales services than selling its engines, and I believe display manufacturers can do the same if they can find a new market” said Chung In-jae, a former vice president of LG Display.

The companies need to invest more money on researching organic compounds to lead the OLED market, since raw materials take a big portion of their profitability. Currently, Japanese firms such as Idemitsu Kosan supply most of the materials to the manufacturers.

“Unlike semiconductors, the companies need to have strong basic chemistry backgrounds to catch up in the technology of organic compounds that are used in OLEDs,” said Yoo from Kistep.