Notable article on Korea from 1902 uncovered in U.S.

Notable article on Korea from 1902 uncovered in U.S. 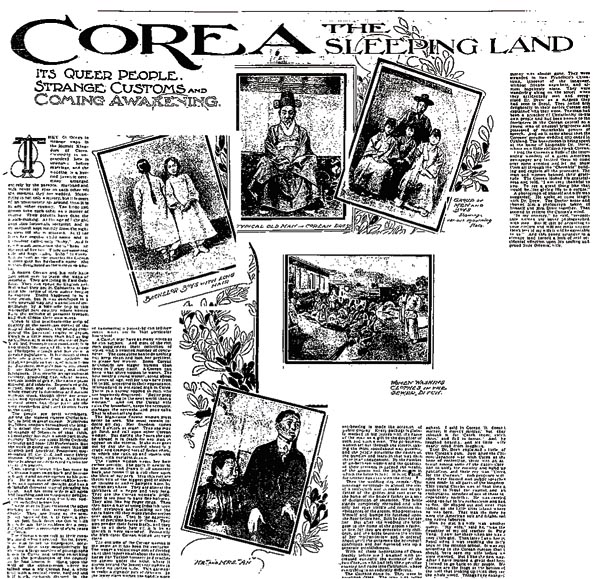 A full-page interview with Korean independence activist Ahn Chang-ho (1878-1938) published in the San Francisco Chronicle on Dec. 7, 1902, was discovered last week by a Korean American professor.

The article, “Corea: The Sleeping Land,” describes in depth the country, its people and customs. Prof. Chang Tae-han of University of California, Riverside notified the local media March 6 about the article he discovered during research.

According to Yoon Kyung-ro, head of the Dosan Ahn Chang-ho Memorial Foundation, the discovery is significant. “It was known that Dosan [Ahn’s pen name] did an interview with the American press, but the content was unknown,” Yoon told the JoongAng Ilbo. “Thanks to the article, we can learn more about Dosan and what he was like in his younger days.”

Ahn, who was then only 24, had just moved to the United States with his wife, who was 19. In hopes of learning about the education system in America, Ahn entered an elementary school in California, quickly becoming the talk of the town and leading to the interview. Ahn and his wife were temporarily staying at a home of Dr. Drew, a physician who lived in Korea for eight years. Drew acted as an interpreter for the interview.

In the interview, Ahn told the reporter that he had come to America to learn and to go back to his home country and become a teacher. “I am a stranger to your customs. All I can do is to ask how to do anything. After a while, I shall learn why you do it,” Ahn said. He described Koreans as “frogs at the bottom of the well that looking up think they see the world” and added that he himself thought of foreigners as “villains” until he met some in Seoul.

About two-thirds of the article describes Korea in detail, noting that women are “not rated high in Korea.” Yet the “Korean wife rules the household, keeps the accounts, manages the servants and pays calls. That is about all she does.”

The article also details “unmarried Korean men” and their “close resemblance to women.”

“Until a Korean is married he always wears his hair in a long, loose braid like an American schoolgirl’s,” wrote the reporter. “There are very old bachelors in Korea with their hair in a long braid, and they all look like women. The foreigner arriving in Korea and learning that the women are never seen in the streets till after nightfall is generally considerably confused at seeing on all sides hundreds who look to him all the world like young girls and women.”

Professor Chang said he’s planning to introduce the article and his research in November at a seminar organized by the Dosan Ahn Chang-ho Memorial Foundation.