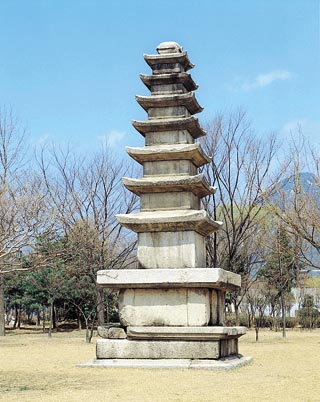 When this stone pagoda was moved to Gyeongbok Palace in 1915 from the site of a ruined temple - which had been wrongly known by the name Gaeguksa - located near Gaeseong, Gyeonggi, it had only its main seven-story structure.

It was not until many years later when a more extensive survey was conducted on the temple site that historians discovered the pagoda’s base along with the temple’s correct name, which is Namgyewon.

The newly excavated double-tier base was moved to the location of its main structure at the palace precincts; finally, both were moved to and restored at the current location in the National Museum of Korea.

The pagoda’s overall structure is very similar to the typical style of Silla Dynasty (57 B.C. to A.D. 935) pagodas; a closer look at its details reveals notable differences, however.

First, the lower base of this pagoda is conspicuously taller than ordinary Silla pagodas, whereas the upper base is slightly lower.

The body and roof of each story are made by carving a single stone block, and each body has a pair of corner columns carved in low relief.

Each roof is comparatively thick, with corners turned up rather dramatically - showing the influence of the Goryeo pagodas - and three-step cornices under the eaves.

The finial is heavily damaged, leaving only part of a “dew basin” (Noban) and an “overturned bowl” (Bokbal) carved with a single stone block.

An imposing ambience created by a lofty structure - carved using the techniques refined by Silla artisans - and some details showing the influence of Goryeo masonry suggest that the pagoda was originally built before the mid-Goryeo period (918-1392).

The 1915 restoration work led to the discovery of seven scrolls bearing the Transcription of Saddharmapundarika Sutra (The Lotus Sutra) in Silver on Indigo Paper, which were enshrined in the pagoda when it was renovated in 1283 under King Chungnyeol (r.1274-1308).