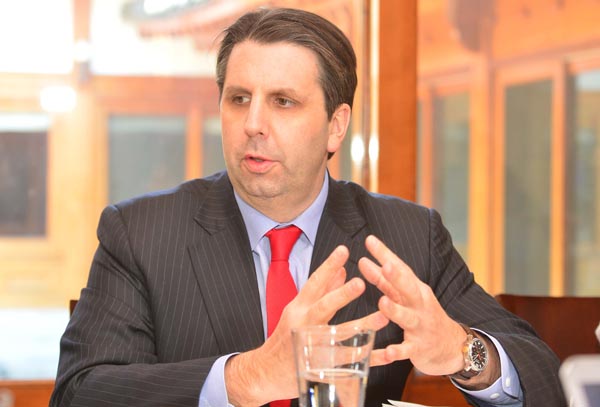 Mark Lippert, the U.S. ambassador to Seoul, talks to the press on Friday at his residence in central Seoul. [newsis]

Mark Lippert, the U.S. Ambassador to Seoul, said Friday that Washington’s policy toward North Korea was not aimed at a regime change and that recent unilateral and United Nations sanctions were meant to “sharpen the choice” for Pyongyang to abandon its nuclear program.

Washington’s ultimate goal is to use “principled diplomacy fundamentally to solve this issue of the denuclearization on the Peninsula,” he said at a roundtable press conference with local media at his residence in central Seoul, leaving the door open to “credible and authentic negotiations … [if it means the] verifiable, irreversible denuclearization of the Korean Peninsula.”

America’s top envoy also emphasized that the United States was pleased by the UN Security Council resolution, which he said was due in part to “unprecedented cooperation among the Republic of Korea as well as other like-minded states.”

UN Security Council resolution 2270 was adopted unanimously on March 2 and is so far the toughest international attempt to curb North Korea’s financing of its weapons of mass destruction programs.

“We do believe that the sanctions, at a minimum, will have a strong impact on slowing and curtailing the progress on the nuclear and missile programs by making it harder to obtain components, parts and resources for those programs,” Lippert said.

“I think there is no argument that these unprecedented sanctions certainly do accomplish the objective of sharpening the choices and bringing the choice into stark contrast for the North Korean leadership,” by imposing costs and making its weapons of mass destruction program “tougher to grow over time.”

But they also offer a way back to the long-stalled six-party talks to denuclearize Pyongyang, he added.

“We are hopeful that North Koreans will come back to the table and engage in credible, authentic negotiations in and around its nuclear programs so we can move forward with denuclearization of the Peninsula,” Lippert said. “[This] ultimately is the best way to promote peace and prosperity here through in Northeast Asia.”

The six-party talks, a negotiation platform with China, Japan, Russia, the United States and the two Koreas, was originally formed with the aim to convince Pyongyang to abandon its nuclear weapons program but has been stalled since 2008, when North Korea walked out.

Washington is in close communication with Beijing, the American envoy said. “We continue to talk to the Chinese about a way forward, and how we can resume six-party talks.”

Lippert also emphasized that U.S. policy remains unchanged. “Denuclearization is our No. 1 priority,” he said, along with faithfully implementing the UNSC resolution.

China has also renewed calls for talks on a peace treaty to officially end the 1950-53 Korean War, which culminated with an armistice agreement.

Seoul’s own set of unilateral sanctions on North Korea, the diplomat said, “shows to the international community that the South Koreans have a strong sense of purpose in solving this issue once and for all,” along with the “direct benefit of reducing hard currency potentially going to missile and weapons programs.”

Washington will remain vigilant, Lippert said, pointing to the ongoing joint military exercises between the United States and South Korea as “another robust example of [the] strong coordination between our militaries to provide defense and deterrence here on the peninsula [and] promote peace and prosperity in the region.”

As for Pyongyang’s continued provocations and threats since the resolution, he said, “We always take these types of actions, these types of threats, this type of rhetoric seriously.”

“It’s precisely why we have spent so much time and energy in New York and around the world diplomatically working to roll back, curtail, thwart, the Byungjin policy,” he said, referring to the North’s aim to develop nuclear weapons in tandem with its economy.

He also emphasized that the U.S.-led Terminal High Altitude Area Defense (Thaad) system was “not a bargaining chip.”

Seoul and Washington postponed signing a terms of reference agreement to launch Thaad talks on the day U.S. Secretary of State John Kerry held talks with Chinese Foreign Minister Wang Yi and came to an agreement over a draft Security Council resolution expanding sanctions on Pyongyang.

“The reason we have started official consultations on Thaad is to defend against the growing missile threat from North Korea,” he said.