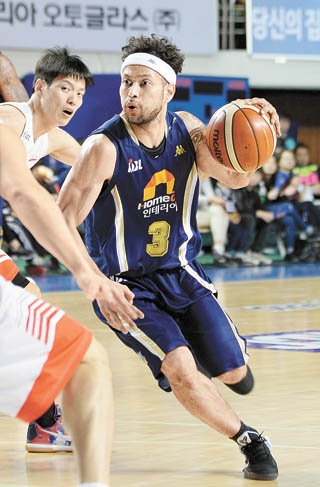 With the Jeonju KCC Egis trailing in the KBL finals, one of the players receiving fan’s attention is guard Chon Tae-poong.

Chon joined the KBL by the KBL Ethnic Draft, which was established in 2009 to provide mixed-race Korean players with foreign citizenship an opportunity to compete for a spot in the KBL. Chon, formerly Tony Atkins before he was naturalized in 2009, was picked first by the Egis in the first KBL Ethnic Draft.

Chon played for the Egis for three seasons before moving to Goyang Orion Orions. This was because of KBL regulation which state that a naturalized player cannot play for a single team more than three years. Because of the regulation, Chon had to bounce around between teams before turning a Free Agent (FA) to finally return home this season.

Chon averaged 28 minutes 41 seconds of playing time, 10.96 points, 2.6 rebounds and 2.7 assists per game during the regular season to help the Egis advance to the playoff. He was a runner-up for the regular season MVP title, but lost the honor to Ulsan Mobis Phoebus Yang Dong-geun. In the four playoff games against the Anyang KGC, Chon played 31 minutes 38 seconds on average while putting up 13.75 points, 4.3 rebounds, 4.0 assists and 2.0 steals per game.

Chon’s Egis will take on Lee Seung-hyun’s Orions in the KBL finals.