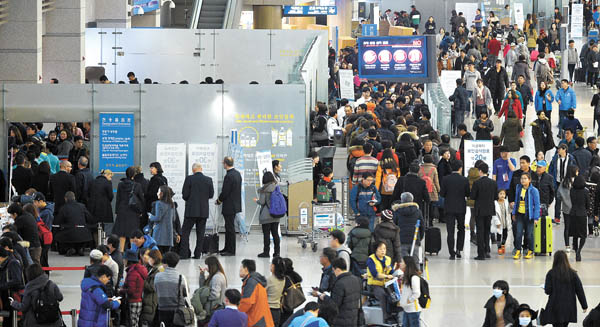 Nearly two months after it came under fire for its failure to manage luggage during the New Year holiday season, Incheon International Airport has announced plans to improve overall infrastructure.

In the road map jointly announced by the Incheon International Airport Corporation (IIAC) and the Ministry of Land, Infrastructure and Transport on Monday, the airport will try to improve its baggage handling system, which jammed during the New Year holiday season.

But this was just a small part of the airport’s broader plan to become a travel hub in northeast Asia.

The IIAC said 90 airlines currently use the airport, but it wants to boost the figure to 110 by 2020. One of the keys to accomplishing this goal is attracting China, which is expected to surpass the United States to become the world’s biggest airline market by 2029. In order to attract Chinese flights to Incheon, the IIAC said it will extend the Open Skies Agreement, which allows airline companies to launch flights to cities in specific regions by simply registering with an airport, rather than requiring government approval. Currently, Shandong and Hainan are the only regions covered under the agreement, but the IIAC said it will try to sign deals with other regions in the central and western parts of China that are currently being industrialized.

“It is hard to tell how many new flights will come to Incheon since they will get decided in an agreement to be held in the future,” said Kim Tae-seong, deputy manager of the airport’s future strategy division. Looking at Hainan and Shandong, the number of flights to Incheon nearly doubled after the agreement, according to the IIAC.

While trying to attract more flights from China, the IIAC will also try to launch more direct flights with India and other countries including Iran, a country that is expected to increase its overall trade with Korea following the lifting of economic sanctions.

As part of its efforts, the IIAC said it will offer some incentives to foreign airlines interested in launching new flights to Incheon, including the exemption of some airport-related fees for up to a year.

It expects Incheon Airport will increase the number of visiting passengers from last year’s 49.28 million to 66 million by 2020, the fifth most in the world.

The IIAC also announced 10 service categories that it will work on to improve, including the expansion of parking lots and reduction in passengers’ check-in times.

The airport said it will provide four additional mobile zones allowing passengers to check in using a tablet, boosting the total number to eight by 2020.

It will also add 20 portable check-in counters this year for use when the counters are heavily jammed, totaling 50 counters by 2020.

“It is a part of our work to improve the baggage handling system before we finish building the second terminal to manage luggage with stability at all times,” Kim said. “Improving such systems, the average check-in time will be reduced by five minutes, or from 45 to 40 in the next five years.”

The second terminal is scheduled to be completed by 2017.

The airport got into trouble during the New Year holiday season for mishandling thousands of bags, causing delays on 159 flights.

“We will cooperate with the airport and other related agencies to realize these plans,” said Kim Young-guk, manager of the Transport Ministry’s aviation policy division.