Rose Motel back with new album

Rose Motel back with new album 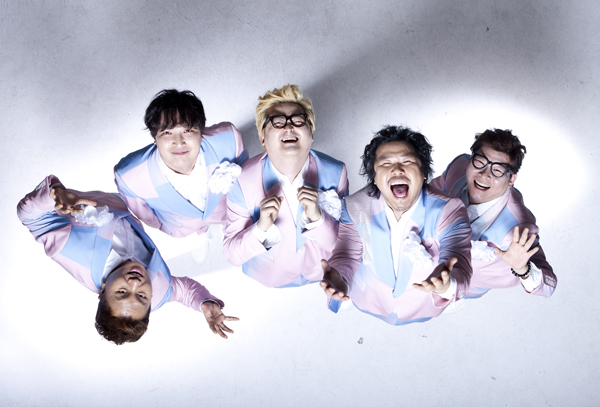 Korean indie band Rose Motel does not look like a typical band.

As a matter of fact, every one of the five members doesn’t quite conform to any adjective that usually denotes attractiveness: they are not handsome, fit nor refined. Their average age stands at 37.

Yet, they still managed to instantly become a buzzed-about band with their debut album, “You Might Not Be Able to Marry,” in 2013.

In particular, the album’s lead track, “Bong Suk E,” in which the group’s lead vocalist, Yuk Jung-wan, cheesily sings about inducing a woman to go to a nearby motel with him, could spark the interest of any music fan and generate laughs with its humorous lyrics.

With the members’ goofy and inexplicable charm, the band has been spotted here and there on television, but it took them three years to finally grant their anxious fans a second full-length album, titled “Rooftop House,” which was released today.

However, upon hearing the first couple of songs from the new 10-track album, it is immediately apparent that something in the group has changed - they have become more mature.

“It is music that came from within us,” the band’s bass player, Yun Jang-hyun, said in a recent interview with the JoongAng Ilbo at their studio in Sunhwa-dong, central Seoul.

The first track, with the same title as the album, tells of a 30-something-year-old man who lives in a shabby rooftop apartment. Despite the pathetic appearance, he reassures himself that he is the happiest person on earth since he lives “closest to the stars.” The melody is lyrical up to the point where it even sounds innocent.

Yun says there was no breakthrough moment that led to their change in style, but rather, that it happened in an organic way as they tried to tell their “true story.”

Singer Yuk agreed with his colleague, saying, “Trying to present our stories in a nice way soon becomes forgettable.

“Rose Motel’s songs are about us getting old,” he added.

Before they got to the final stage of producing their second album, the five members held a fan meet-up, where the band played 10 songs in order to let the fans decide on the lead track. Some 250 fans gathered to hear their new songs firsthand, and ultimately decided on two tracks they liked the most.

“We didn’t expect ‘Stranger’ to receive that much applause, but as soon as we played it, fans started cheering. It was really exciting because that track barely made it onto the album, even,” said Kang Jun-woo, a guitarist and vocalist.

The band says the 10 tracks on the album were carefully chosen out of 40 to 50 options, which is why they had to ask for help from fans to decide on the lead tracks.

“All of them are so precious to us, as if they are our own children,” Yuk said. “But I feel sorry that not all of them get the spotlight they deserve.

“The speed at which people consume music these days has become so fast, and I feel as if our effort isn’t as appreciated as much as it was before,” he continued.

On the day of the interview, the five members arrived at the studio riding in a van - something considered an emblem of success in the Korean entertainment scene - with four more people who are in charge of their schedule, makeup and wardrobe.

It was a big change compared to their first interview, when they showed up by themselves wearing sweatpants and slippers.

And while only one of them was married at the time, now Yuk, the last remaining single member, is looking forward to tying the knot on Sunday.

When asked about their future plans, the five members unanimously answered they hope to have enough financial stability to support a family while maintaining enough energy to keep making music.

The new album is so different from the first one, and once their lives continue to change, their music is bound to change again as well, they explained. Even though it’s unusual for bands to last that long, especially in the fast-paced Korean music scene, Rose Motel hopes to stick around.