Markets suggest optimism about the economy

Markets suggest optimism about the economy 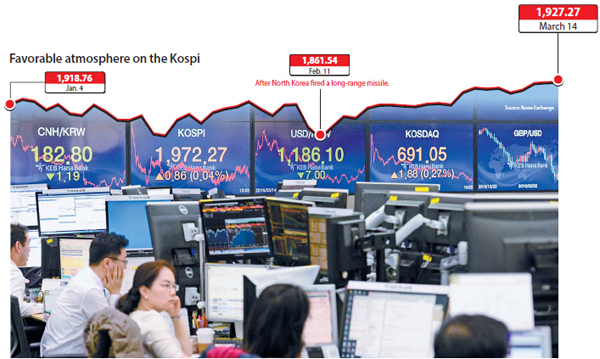 The trading room at the KEB Hana Bank in downtown Seoul on Monday. The stock market and currency exchange have shown signs of stabilizing recently. [NEWSIS]

Is hope of an economic recovery finally sprouting? Recent signs suggest this might be so, at least in the financial markets.

Korea’s benchmark Kospi has been gradually improving recently, and reached this year’s record high of 1,985.90 on Monday.

The main bourse opened 14.08 points higher than Friday’s close, continuing with modest rallies throughout the day. It was the first time this year the Kospi surpassed the 1,980 mark. It closed at 1,972.27, up 0.04 percent from the previous trading day.

The index has risen for four consecutive days largely on signs of improving conditions in the global economy, including rebounds in international oil prices along with rallies in equity markets around the world.

Foreign investors bolstered the rally as they continued buying local shares for the past three days. They purchased 81.2 billion won worth of Kospi shares as of 3 p.m.

Thanks to the recovering oil prices, Korea’s import prices rebounded from continuous drops to an increase for the first time in eight months since last July.

According to the Bank of Korea on Monday, its import price index stood at 76.16 in February, up 1.6 percent from January.

Since Korea is a major importer of Dubai oil, a 7.5 percent hike in the price of Dubai oil for the past month - from $26.86 per barrel in January to $28.87 as of February - caused the overall import price index to climb.

A report by the International Energy Agency projecting possible rises in oil prices this year also helped raise the futures price of West Texas Intermediate to $38.5 per barrel, the highest since December.

Considering that import prices are usually reflected in consumer prices one or two months later, such rises in import prices can be a positive sign of better inflation figures for the coming months.

Still, the import price index for February is 7.4 percent lower than it was in 2015.

Markets across the globe showed similar ups at the end of last week in response to the European Central Bank (ECB)’s unexpected announcement that it would lower its interest rate to zero. The Dow Jones Industrial Average soared 1.28 percent on Friday. Both European and Asian stock markets showed rallies and improved investors’ sentiment.

“Including the G-20 finance ministers’ meeting in February and the ECB’s decision, such various policy efforts globally have helped improve investment sentiment across the globe,” said Park Sung-hyun, a research fellow at Samsung Securities.

The rise in import prices seems to also be stabilizing market concerns about the weakening Korean won.

The won traded at 1,186.07 won against the greenback, strengthening 0.6 percent from Friday. The won’s value was the highest so far this year, having struggled since concerns over North Korea’s hydrogen bomb provocation in early January.

The nation’s secondary Kosdaq market also reached a new high for this year on Monday. The index closed at 691.05, up 0.27 percent from Friday, rising for the fifth straight day. During the day, the index even hit 696 but quickly declined due to sell-offs by institutional investors.

How long the favorable atmosphere will persist in the Korean market hinges on the upcoming U.S. Federal Open Market Committee meeting slated for March 15 and 16.

“If the Fed does not raise its interest rate in March, global fund flows may favor the Korean market, at least until June,” said Han Yo-seob, research fellow at Daishin Securities. “Still, the pace of the Chinese slowdown, further changes in commodity prices and U.S. economic indicators may be important factors in determining the direction of those global funds.”

It seems like the won’s fate will also likely be determined by the Fed’s decision.

“The Fed meeting will also determine whether or not it will extend the weakening of the dollar,” said Park. “But there is consensus that the Fed would find it hard to raise its key rate for a while due to signs of slowdown in the U.S. economy.”

“If the Fed freezes the rate this month, the current market rallies and weakening of the dollar would continue for the time being,” he added.