Concerns over AI ease ahead of final Go match

Concerns over AI ease ahead of final Go match 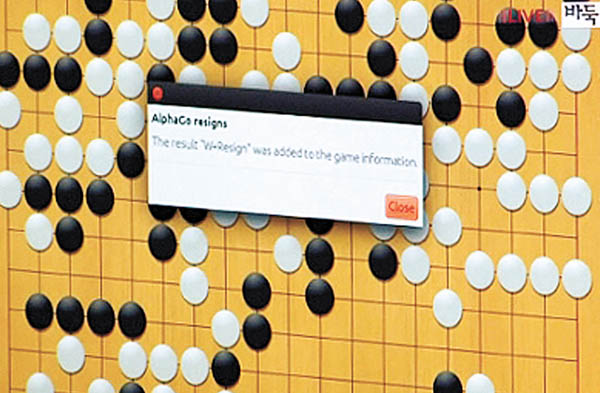 A pop-up with the word “resigned” appears on the screen after AlphaGo admitted defeat on Sunday. [NEWSIS]

Top-ranked Go master Lee Se-dol’s dramatic strike back in the fourth game on Sunday against Google’s artificial intelligence computer algorithm AlphaGo was a scenario that even the most seasoned professional Go players did not anticipate.

After the Google DeepMind software beat the board game guru three times in a row, predictions prevailed that AlphaGo would end up making a five-to-none victory against Lee. The media churned out articles en masse warning that this presaged a future in which machines would come to dominate areas traditionally considered the exclusive realm of human intelligence - medicine, law, journalism - until Sunday.

But Lee’s ability to spot weaknesses in this self-learning software armed with 1,202 standard processors and 170 GPU cards was a testament to the fact that by far the most powerful machine still has a long way to go before it can truly match the ingenuity of the human mind.

“Humans are afraid of things that they cannot understand, and fears over technology, in many cases, stem from this,” wrote Dennis Hong, a celebrity professor in humanoid robotics and engineering at the University of California in Los Angles, referencing the game on his Facebook page on Monday. “I do not see a grim future. But I should refrain from making one.”

Journalists from around the world applauded the human representative’s victory at the postgame conference on Sunday, and social media users on Twitter and Facebook have come up with an endless array of parodies of the man-made, self-evolving machine.

Having discovered where his opponent’s defects lie in just three games, Lee, the 33-year-old master of Go, or baduk in Korean, proceeded with his 78th move by playing a “wedge” in the middle of the board during the fourth game. It was a bold move, as it instantly put him on the verge of losing, commentators later said in awe. They compared the 78th position to “God’s move.” But Lee obviously knew that AlphaGo could never have predicted such a creative strategy.

The 9-dan world champion’s 78th move immensely boosted the number of probabilities that the Google system had to calculate, forcing it to make increasingly unusual or blatant moves, and eventually resigning on the computer screen. AlphaGo is programmed to adjust its playing style based on its evaluation of how the game progresses, and when the situation is deemed bad, the program crashes more rapidly than expected. Demis Hassabis, CEO and founder of the London-based DeepMind, admitted that AlphaGo did make mistakes during the third match. The program made a mistake on move 79 but only realized its error by move 87. AlphaGo’s chance of winning was “around 70 percent at move 79 and then dived on move 87,” Hassabis tweeted. “He was too good for us today and pressured AlphaGo into a mistake that it couldn’t recover from.”

Lee told reporters that he has found two weaknesses in his opponent. First, AlphaGo played better with white stones. Second, it exhibited “bugs” when faced with unexpected tactics.

When a reporter raised concerns during Sunday’s press conference about the danger of deploying such software in other domains, Hassabis made it clear that his program was only a prototype, and that it would be tested before such measures are taken.

Hassabis’ team, DeepMind, will analyze the loss when they return to the United Kingdom. Their aim is not merely to program a proficient game player but, as Hassabis said last week, to develop technology that can be implemented in fields such as health care, smartphone technology and robotics.

Kim Jin-hyung, head of the Software Policy & Research Institute, shed light on the effective side of the AI.

“The advance of AIs like AlphaGo could well be interpreted as the development of smart servants for human beings,” he said. “The smarter the servants become, the more comfortable we get.”

Expectations for Lee beating the Google machine in the final match, scheduled for 1 p.m. today at the Four Seasons Hotel in central Seoul, have heightened. Lee will play with black stones in the upcoming match, for which he obtained approval from Hassabis on Sunday in the presence of the press.

The ever-placid champion believes using black stones will present him with a greater challenge, and that a victory under such conditions will therefore be more “valuable.” For AlphaGo, the color may well be meaningless.

Instagram's NFT posts to be expanded to Korea