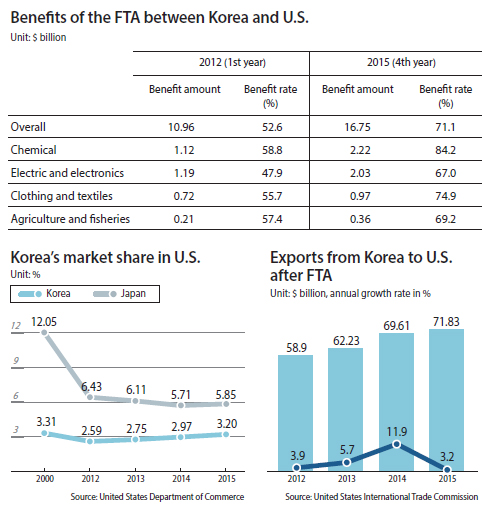 Goods exported from Korea to the United States hit a 15-year high last year, largely thanks to a trade pact between the two countries, the Korea International Trade Association (KITA) said.

On the fourth anniversary of the signing of the free trade agreement, KITA said on Monday that the market share of Korean goods in the United States was 3.2 percent last year. The total is the highest since 3.31 percent in 2000 and is a 0.61 percentage point increase compared to 2.59 percent when the FTA kicked off in March 2012.

“Although [there are] difficult economic situations at home and abroad, stable export records to the United States were achieved through products under FTA benefits,” the report said.

While U.S. imports of all FTA-benefitting products declined 11.9 percent year on year in 2015, imports of Korean-made products increased 5.1 percent, thanks to the domestic electronics, mechanics, agriculture and fisheries sectors, which grew over 12 percent in exports to the United States.

Still, there was increasing domestic demand for automobiles and liquefied petroleum gas last year. Popularity for U.S.-imported automobiles in particular surged due to a cut in import tariffs on cars to 4 percent from an original 8 percent. This year, imports of U.S. cars are expected to grow in volume since the lowered tariffs are completely eliminated starting this year, four years after the initial signing of the FTA according to agreed terms.

Potential products to boost exports in coming years are automobiles and auto parts, industrial boilers and chemical supplies. While the export tariff on cars to the United States has been set at 2.5 percent, it is eliminated from this year. Already, exports of medium-size sedans to the United States have increased 32.8 percent year on year in January.

“Now, 95.7 percent of our exports to the United States can be made without tariffs,” said Park Ji-eun, a senior analyst at the Institute for International Trade under KITA. “Korea should more actively make use of the Korea-U.S. FTA to target the U.S. market amid economic uncertainties in the global export markets.”