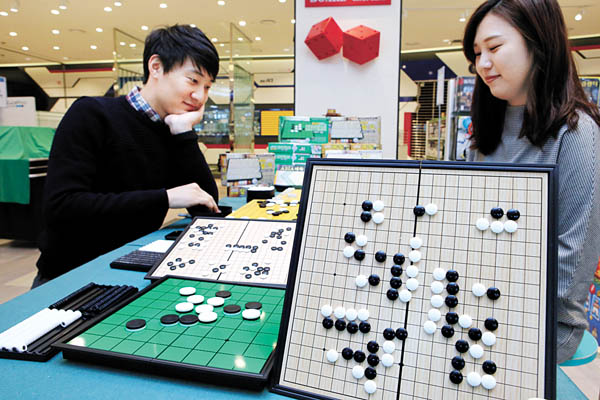 The best-seller section at Korean bookstores is usually filled with fiction or self-help, but these days, it’s full of books on artificial intelligence and the game of Go.

Only 311 meters (0.2 miles) away from the Four Seasons Hotel in Gwanghwamun, central Seoul, where the historic Go match between Google DeepMind’s computer algorithm AlphaGo and famed player Lee Se-dol is taking place, scores of people checked out the best-seller section at Kyobo Bookstore on Sunday.

Overall, people seemed less interested in Go than in the implications that the match has for humanity’s relationship to artificial intelligence.

“I’ve never been interested in books about technology or science, or in humanities books dealing with the issues,” she said, “But the historic tournament between Lee Se-dol and Google’s AlphaGo made me really curious about how the future will unfold considering the rapid progress in technology and science.”

Other featured books in the best-sellers section also explore similar themes. “The Age of Robots, Human’s Work” by Korean journalist Koo Bon-kwon is another best-seller, investigating what future job markets will look like as artificial intelligence evolves.

Still, some customers sought books for Go beginners to better understand the rules of the ancient board game.

A few steps into the kids’ section, copies of a Go guide book written by Lee Se-dol were prominently displayed.

“We’ve seen growing demand for the Go books after he began competing with the computer system last week,” a book manager at the kids’ section said. “Before the game, we placed the books beneath the stand, but we have brought them up because of the rising demand.”

Some Koreans are making a pilgrimage to big markets to purchase the items necessary to actually play the game.

Hyundai I’Park Mall said on Monday that sales of Go boards and stones skyrocketed after the landmark match began.

Sales of the items rose by 97.2 percent between March 1 and 13 compared to the same period last year.

“When it comes to sales of board games like Go, they usually shoot up during specific holiday seasons like Children’s Day and Christmas,” said Yeom Chang-seon, a spokesperson of the mall in Yongsan District, central Seoul, “So such a steep rise is very unusual. It is clear that the Go match largely contributed to the sales growth.”

Sales of Go-related items jumped by 105 percent between February 1 and March 9 compared to the same period a year earlier.