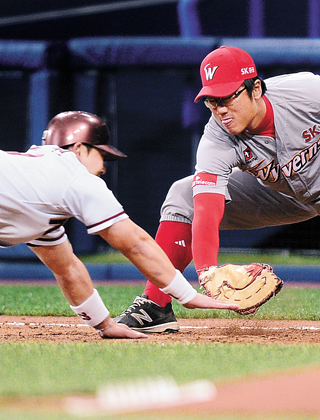 SK Wyverns came out with a 6-4 win against the Nexen Heroes yesterday in a Korea Baseball Organization exhibition game. The event marked the first game played at Gocheok Sky Dome - the first domed baseball stadium in Korea and the new ballpark for Nexen Heroes - in Gocheok-dong, Seoul. Wyverns center fielder Kim Kang-min hit a grand slam in the fourth inning to lift his team over the Heroes. [NEWSIS]