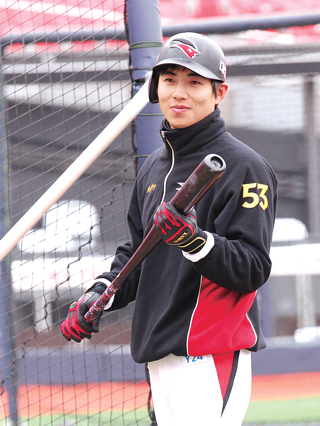 KT Wiz outfielder Lee Dae-hyung is confident that he can outrun any player between bases in the Korea Baseball Organization (KBO) this season.

Nicknamed “Supersonic” because of his speed, Lee is considered one of the most adept base stealers in the KBO today. He stole over 50 bases per season from 2007 to 2010 while playing for the LG Twins and claimed the Best Base Stealer award for four consecutive years. Owing to his physique and performance on the field, he was widely popular among fans. But injuries and a subsequent slump in his performance casted a shadow over his career. His number of stolen bases got smaller each season until he took just 13 in 2013 and 22 in 2014.

One of the reasons for the slump was that he was simply unable to play in many games. In the early years of his career, Lee struggled with a dislocated shoulder, a price he had to pay for sliding into base so many times. The constant fear of dislocating his shoulder again often held him back.

Lee became a free agent in 2014 and spent his first year with the KIA Tigers. He then transferred to his current home team, the Wiz, in 2015. After moving to the Wiz, Lee decided to go full tilt once again. In his first season with the team he stole 44 bases, placing third in the league in stolen bases. Last season was the first in which he had stolen more than 40 bases in five years, since his astonishing 66 stolen bases in 2010. Lee was in constant competition with Park Hae-min of the Samsung Lions and Park Min-woo of NC Dinos for the title of Best Base Stealer.

With the new season fast approaching, Lee is prepared to fly through the bases once again. Although the 33-year-old outfielder is now considered a veteran in the game, he is confident in his legs. “In terms of my fitness level and my agility, I still can outpace the younger players in the KBO,” said Lee.

Lee has yet to set exactly how many bases he would like to steal this season, but he is determined to surpass his record from last year.

Lee is well known for his fitness and self-discipline. Lee consumes two meals a day and refrains from high-calorie foods. If he has any kind of “cheat” meal, he heads straight to the weight room to work it off.

“I resent feeling heavy after eating too much. It can really hurt my performance as well. During summer when it’s hot outside, I consume more food to replenish my energy but I still abide by two meals a day rule,” said Lee.

Lee is one of the highest paid players in his team and he is well aware of what the club wants out of him.

“My value as a player depends on my ability to steal bases,” Lee said. “That means self-discipline and watching my weight is crucial. If I don’t, my value plummets alongside my career.”