Employees in Korea are working longer hours but accomplishing less, according to a report jointly released on Tuesday by the Korea Chamber of Commerce & Industry (KCCI) and the global management consulting firm McKinsey & Company.

The project studied some 40,000 employees from 100 Korean companies of varying sizes for nine months, starting in June, mostly examining employees’ daily work routines and corporate culture. As a result, they spotted one counterintuitive phenomenon. Namely, working more hours resulted in less work being done per hour. 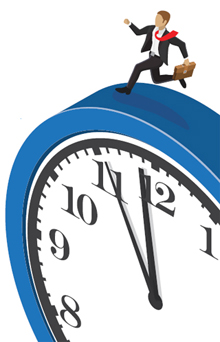 The project based this finding on the daily routines of 45 employees from eight different companies, selected from the larger pool of 40,000. Among those 40,000, 43.1 percent worked nightly overtime hours for an average three days or more per week, whereas only 12.2 percent of respondents said they had no nightly overtime hours. On average, employees worked 2.3 extra days per week.

An unnamed employee who habitually works late was estimated to stay in the office for 11.5 hours a day on average, while other employees worked about 9.8 hours. However, the overtime worker’s productivity stayed at 45 percent, which was 12 percentage points lower than that of workers who went home on time.

Moreover, employees were found to have remained productive for around five hours a day, regardless of the number of their overtime hours.

“In actual observation, there were several cases where employees had to stay late due to sudden orders from a senior just before leaving work,” a KCCI spokesman said. “A lack of communication in top-down systems is another cause.”

These maladroit practices explain many domestic companies’ lower ratings in McKinsey’s Organizational Health Index, a tool developed by the firm to evaluate an organization’s competency based on nine categories, including leadership, innovation, accountability and motivation.

Of the 100 Korean companies examined in the index, which also comprises 1,800 companies worldwide, 77 were graded lower than average. Among those, 49 were small and medium-sized enterprises.

“I think the figures imply that domestic companies are still sticking to old business models, especially the idea that every company should set the market leader in its sights, regardless of resources,” said Choi Won-sik, McKinsey’s Seoul office manager. “[This way of business] makes it hard to react to rapidly changing market paradigms.”