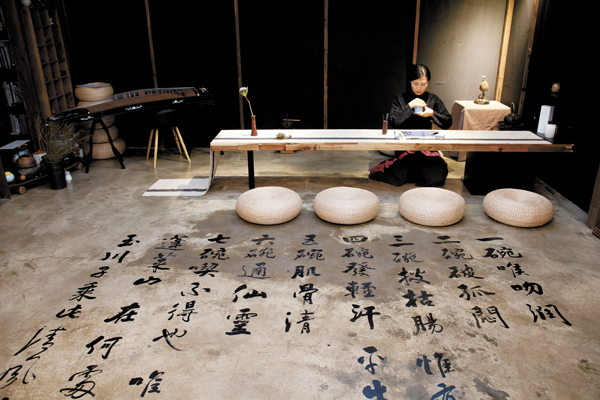 Unlike tea ceremonies, not many people have heard of incense ceremonies. The practice involves focusing one’s mind by absorbing the energy from good scents - it is a way of discipline that one observes one’s body and mind.

In China, incense ceremonies are considered a type of high culture. Trade had been actively carried out since the Tang Dynasty (618-907) in China to obtain high-quality incense from abroad. Literary men of the Song Dynasty (960-1279) in China also valued the culture of incense and considered it as one of the four tools to cultivate one’s mind and improve the artistic self. The culture is called “Sa-ban-han-sa” and it includes incense, tea, flower arrangement and drawing.

The culture of incense spread to Korea during the reign of King Nulji of Shilla (57 B.C. to A.D. 935), according to the “Samguk-yusa,” a book about the legends and history of ancient Korea’s Three Kingdoms.

According to “Goryeo-dokyung,” a book about the Goryeo Dynasty (918-1392) written by Seo-gung of the Song Dynasty, Koreans enjoyed the culture of incense as well.

“San-ye-chul-hyang,” a beautiful incense burner made during the Goryeo Dynasty, demonstrates the high level of Korean incense culture at the time. However, it did not continue after the Japanese invasion of the Korean Peninsula in the 16th century.
The culture also ceased to be practiced in China during the Cultural Revolution. In the early 2000s, the Chinese government became invested in revitalizing the culture of incense that was no longer widely enjoyed by the people.

“The Chinese government has been collecting data and references from Taiwan, Japan, Turkey and England on a massive scale in order to get an idea of how incense has been enjoyed by ancient people,” said Zheng Jindan, who is a member of the Chinese Incense Traditional Institute under the Chinese Ministry of Culture and Tourism as well as the president of the Korea Incense Culture Association.

According to her, the Chinese government initiated a project that aims to revitalize the culture of incense ceremonies.

How can incense ceremonies be defined? How can people discipline their minds through the practice? The Joongang Sunday visited a place called Yiru, an incense culture center located in Anguk-dong, central Seoul.

It was Friday afternoon, and Zheng welcomed visitors in the tranquility of the chaguan, or a place where people enjoy tea. “Enjoying music, having a cup of tea, having a friendly talk and listening to incense help people become refined,” she said.

Indeed, she refers to the experience as listening to incense rather than smelling it.

Smelling means that people are an active being. But the incense ceremony tells us to wait until the scent comes to us,” she said. “There is a moment that I can feel the scent, all of a sudden - and it is why I say I listen to the scent.”

“You should abandon the obsession with feeling the scent,” she added.

Although many people think that the scent continuously comes from the incense, she said that it is not true. It comes irregularly, thus people have to concentrate closely while they inhale. This is how people train their minds, according to her explanation.

“Sa-ban-han-sa,” a concept for how learned men of the Song Dynasty enjoyed high culture, was only available to those who were well off and had a lot of spare time. This shows that people can enjoy incense ceremony only if they are relaxed.

“This is why there is a saying, ‘Incense ceremonies are open to everybody, but not everyone can enjoy the ceremony’,” Zheng said.

“On the other hand, it also means that enjoying the incense ceremony can let people relax in this world where people are all busy.” 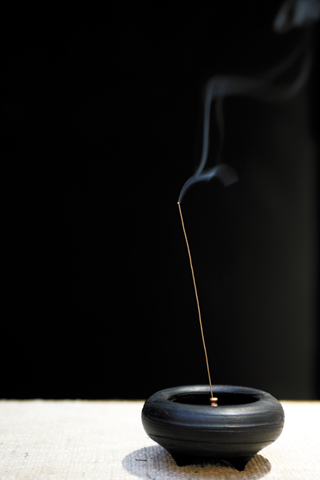 Geum-sa-seon-hyang, a type of very narrow incense stick, is being burned in an incense burner. Zheng says that handmade incense sticks can have a thickness of as little as 0.32 millimeters, while those made by machines are thicker, with the narrowest ones around 1 millimeter. [korea incense culture association]

It has been thousands of years since humans started using incense. It has been used in order to cure diseases and to hold memorial ceremonies for ancestors and gods. The curing of diseases that was practiced in ancient Greece and Rome later developed into aroma therapy, and perfumes was made using the distillation methods developed in the Arab world that spread to Europe through the Crusades.

In Asian culture, the culture of incense has been merged with philosophy and developed into a way of discipline. The “Shurangama Sutra,” a Buddhist scripture, records the first practice of discipline with incense. According to the text, Hyang-um, a child Buddhist, gained enlightenment while he was listening to the scent.

“As I observe the scent, the scent does not come either from the smoke or the fire. … I became free from the anguish and the concerns,” he wrote in the book.

Agarwood comes from trees that have high resin content, such as olive trees. If trees get injured, resin collects on the spot in order to heal the injury. In this process, agarwood is produced.

The type of the agarwood is different depending on the tree species, geography, climate and the soil type. Agarwood from Vietnam is sweeter while that of Malaysia is more salty. Zheng explains that the difference is natural, “just like sugar and condensed milk taste different.”

In fact, the name of Hong Kong has its origin in incense. Hong Kong was famous for producing a lot of agarwood incense of high quality during the Ming Dynasty (1368-1644) in China, gaining the name of “fragrant harbor.”

However, increasing interest in incense resulted in several side-effects: the price skyrocketed and fake products proliferated.

Zheng was raised in Dalian and studied education and Chinese literature at Jilin Normal University. After graduation, she moved to Guangdong Province, a southern region, and worked there. In 1996, her boss at work showed her how to enjoy tea.

“Chinese have the perception that people from the northern regions are impetuous and tough,” she said. “I started studying tea because I wanted to break that prejudice,” she added. She even acquired a certificate for tea tasting in 2004.

She started studying Vipassana, a type of Buddhist meditation, in 2006. She soon encountered difficulty in acquiring the right way of taking a breath while meditating. Her teacher suggested that she try an incense ceremony, and this is how she started to fall in love with the practice.

“Buddha said that people should get away from any obsession. But I became very obsessive with incense,” she said. “This is not what I am supposed to do, according to Buddha, but I want to continue falling in love with it.”

She became a member of the Chinese Incense Traditional Institute, a repository of incense culture where she could get a lot of information on it. She even founded the Korea Incense Culture Association in 2014 in hopes that more Koreans can enjoy incense ceremonies.

She came to Korea in part because her mother was Korean-Chinese and her husband is Korean.

Currently, there are 500 members of the incense association. About 150 members get together whenever there is a meeting, where the members study scent together. There are three centers in Seoul, four in Busan and one in Daegu.

Zheng noted that members from other cities are more interested in incense ceremonies than those from Seoul. “Members from Busan originally enjoyed tea, so they became naturally familiar with incense,” she said. The Daegu center has the most members among all eight centers.

According to Zheng, incense made using artificial chemical glues has a negative impact on people. Therefore, people should only use natural incense that uses plant-derived glues.

One way to discover if incense was made naturally is by putting the ashes on the back of one’s hand. “Natural incense isn’t that high in temperature, while chemically made ones can burn your skin,” she explained. Also, if you feel dizzy while inhaling the scent, it is a sign that the scent was chemically made, she added.