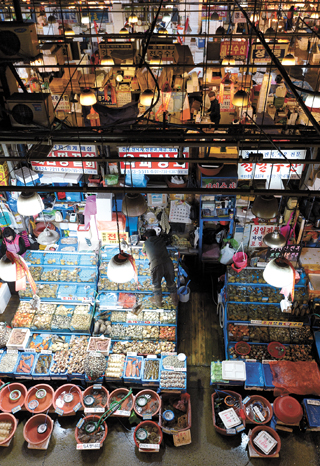 Merchants at the new Noryangjin Fish Market in western Seoul lay out their products on Tuesday. This was the last day the market was open in its original location, next to the new space, where it has been for more than 40 years. The National Federation of Fisheries Cooperatives, also known as Suhyup, has asked every merchant to move into the new facility and has threatened to sue or fine those who continue to operate in the old space. Merchants have been reluctant to move, and the new market was very quiet on Tuesday. The conflict between the merchants and Suhyup is expected to continue to grow. [NEWSIS]