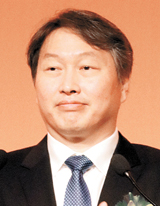 The National Pension Service (NPS), the second largest shareholder of SK Holdings, is expected to oppose SK Group Chairman Chey Tae-won’s comeback as a registered board director. SK Holdings is the holding company of the SK Group.

The NPS said on Tuesday it recently decided to oppose Chey re-taking a seat as a board director in SK Holdings because he has been convicted of a crime twice, once for a breach of trust in 2003 and for embezzlement in 2012.

The final decision on whether the company will give a seat to Chey will be made at the shareholders’ meeting scheduled for Friday.

The chairman was released from prison last year, thanks to a Aug. 15 Liberation Day special pardon, but was soon in the spotlight again in December after confessing that he has a daughter from a secret affair with a woman in her 40s.

“We thought he [Chey] might badly influence SK Holdings since he was convicted twice,” said a spokesman of NPS. “The decision was made lately in accordance with our investment protocols. There were no disagreements on the decision.”

However, the SK Group may still try to make Chey a board director at the shareholders’ meeting. “The issue will be discussed as an official agenda item during the meeting,” said a spokesman of SK Group. “The decision will be made based on many different thoughts from shareholders.”

The NPS previously opposed a move to merge SK Holdings and SK C&C in June last year. The plan was approved as 86.9 percent of shareholders supported the merger.

ISS also supported the merger at that time, but as ISS is against Chey this time, there is a possibility the number of dissenting votes will increase. Sources say SK Group is currently trying to persuade more investors to vote yes.