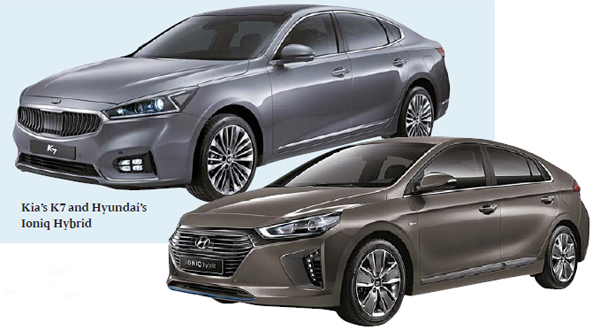 Fuel-efficient cars like compact sedans and diesel SUVs used to be king in Korea, but with gas prices staying low, mid-to-large-size sedans and luxury SUVs are now wearing the crown.

One local model that has particularly benefitted from the trend is Kia Motors’ K7 sedan. The automaker started selling the second-generation model in February. According to Kia, a total of 6,046 K7s were sold that month, up 358 percent from the same period a year earlier. The K7 is offered in three trims - 2.4 GDI, R2.2 and 3.3 GDI - but the models leading sales are the gasoline-engine 2.4 and 3.3 GDIs, which offer fuel efficiency between 9.7 and 11.1 kilometers per liter (22.8 and 26.1 miles per gallon).

Another popular sedan was Hyundai Motor’s first model under the new luxury Genesis brand, the EQ900. The company said it sold 2,476 EQ900s in February, a 14.4 percent rise from the previous month. Considering the sedan is a luxury car starting at over 70 million won ($58,800), sales for the month were higher than expected. The automaker said it decided to double total production for the EQ900, from 16,000 to 32,000 this year.

Only about 1,000 Equus sedans, the predecessor of the flagship EQ900, were sold per month in the past.

“In the case of the K7, 68 percent of its sales came from the gasoline-engine models, while the fuel-efficient R2.2 diesel-engine model accounted for only 20 percent,” said Hwang Kwan-sik, a public relations manager at Hyundai. “This means consumers sought models offering better performance and power when buying a K7.”

Reflecting the trend, sales of large-size cars in the past two months have hit an all-time high. According to industry data, a total of 30,865 large cars were sold in January and February, accounting for 17.3 percent of the five domestic auto brands’ sales in the local market. Previously, the highest figure was 17.2 percent, achieved in 2011.

The low oil prices bode well for Hyundai as it prepares to launch the Genesis brand in the United States, the world’s second-largest auto market.

“The U.S. market wasn’t friendly in the past when the large-size Genesis sedan was rolled out due to high gas prices,” said Hwang from Hyundai. “But the popularity of big cars, including SUVs, pickup trucks and high-performance sedans, are increasing again as gas prices are falling.”

Hyundai still hasn’t started selling the EQ900 in the United States, where it will be known as the G90, but it is feeling hopeful. The company said its Genesis DH sedan, which will be renamed the G80, was the second-most popular luxury sedan in the United States and outsold the Mercedes-Benz E-Class, at 2,532 to 2,362 units. Sales of the Genesis sedan rose by 13.4 percent from a year ago and 62.4 percent from January.

But cheap gas prices aren’t all good for local automakers, as they are badly hurting sales of eco-friendly cars, in which automakers have been investing big.

Sales of domestic hybrids - the Hyundai Grandeur, Sonata and K5 - in February dropped from the previous month. Hyundai’s Ioniq was the only car that saw an increase in sales in February month on month, from 493 to 1,311, but the figure was largely impacted by the automaker’s aggressive discount promotions provided to boost sales. Hyundai rolled out the Ioniq in January.

“The local hybrid car market might shrink due to low gas prices, but automakers need to keep working on the segment just like they did with luxury cars when gas was expensive,” said Lee Hang-ku, a researcher at the Korea Institute for Industrial Economics and Trade. “The market situation can change at any time,”